On not explaining your child's special needs to strangers 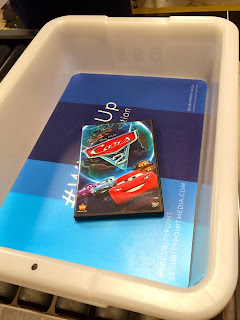 This is a bin at the security checkpoint for LAX in California. Max insisted that his Cars 2 DVD go through on its own. There was a long line of people behind us. It was no biggie, especially if it helped keep the peace; the hustle and bustle of security has been known to make Max lose it. The man behind us gave me a look, but it wasn't him I cared about.

I glanced at the staffer manning the conveyor belt. "He just loves that DVD, and he'd like to get it screened," I explained. "Got it!" she said, and it sailed through.

I have reached a point where I do not feel I always have to explain that Max has special needs in public situations like this. People have their quirks and nuances. The real challenge is deciding whether or not to note that Max has special needs when he disturbs people, as happened when the flight landed. We were circling the tarmac for a few minutes and the kids started squabbling.

I was in a seat across the aisle; Dave was next to them, earphones on, placidly staring into space. This is our usual seating arrangement, as the kids like being next to Sucker Daddy who will gladly buy them overpriced treats from the food cart.

I noticed a woman behind Max peering between the seats to see what was going on and grimacing.

"Kids! Behave!" I said, leaning over.

"He started it!" said Sabrina.

Max let out a string of words only he could understand, but there were a lot of exclamation points in there.

The woman, a well-turned-out matron, glared at me. "Can you please control him?!" she said. "Those sounds are annoying."

I gave her a long, hard look. I could have mentioned that Max has special needs, and that "those sounds" are his way of communicating. In these sorts of situations, I feel as if I'm both parent and special needs ambassador. I want people to better understand Max and kids like him. I want them to know that he is expressing himself in his own way. And that he is not being a brat when sensory issues get the best of him and he loses it, as can happen in noisy places like restaurants.

Thing is, I felt this woman was overreacting. Max had behaved admirably throughout the four and a half hour flight, with nary a peep or a kick. (He used to have this horrible habit of kicking the seat in front of him, but mercifully that's passed.) We were about to disembark. Did she need to know he had special needs? Couldn't he just be any other restless kid, voicing his discontent in his way?

And so I just said, simply, "I'm sorry he's disturbing you."

Dave sat there, obliviously. Sabrina blew me a kiss. Max let out another string of words and an "ARRRRR!" for good measure.

The woman rolled her eyes.