The homework that gave Max new perspective on ability 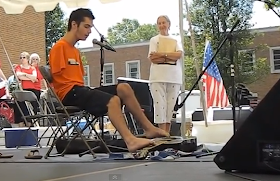 Every Friday, Max has current events homework due. His teacher recommended Dogonews, TweenTribune and Scholastic; we browse them and Max picks out an article he likes. Then we program his speech app to share the title and date of the article, the type of news (local, national or international), the main idea, his opinion and so on.

This week, Max chose a profile on Dogonews of George Dennehy, a 19-year-old musician whose rendition of the Goo Goo Dolls' song Iris went viral last year. Born without arms, George plays both cello and guitar with his feet and sings.

The article had a video of George playing at Musikfest 2012 with the Goo Goo Dolls. When I told Sabrina what we were about to watch, she said "That's impossible!" Ten seconds later, she said, "THAT IS SO COOL!"


Current events takes us a fair amount of time to do. I usually read the articles to Max, trying to get him to pick out words he knows. Inevitably, he asks me to type his answers into the Proloquo2Go for him, but I refuse. He doesn't have the bucks to pay my hourly rate for transcription services. Also: I want him to do it himself. So we have a stand-off, I win and he types.

Max's descriptions tend to be short and to the point. If I had to peck all my thoughts into an app, I'd be do the same. This time was no different:

Then I asked what he thought about the fact that George plays so well with his feet and that he got to play with a famous band. Max said a bunch of stuff to me, none of which I was able to understand. I asked him to type. And he said...