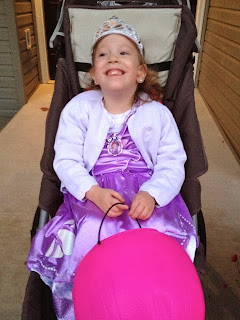 This is four-year-old Izabella Uccello, a Missouri girl who's into all things princess. Her mom, Becki, recently entered her in The Miss Springfield Pageant. Izabella has spina bifida and uses a stander. "I wanted her to have her own thing, aside from physical therapy and speech therapy, just something fun for her to do," Becki told a reporter. Izzi had her clothes and pompom routine all set.

A few days before the November 2 pageant, Becki reached out to officials to ask about accommodations. "I figured in case they did need to modify, they'd have time to do so," Becki says. "But I sure wasn't prepared for it to be inaccessible." 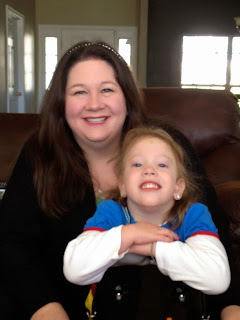 Becki had thought she could leave Izzi's stander on the stage, then carry her up a few steps to it. She learned that the auditorium at Hammons Heart Institute, an affiliation of Mercy Hospital where the ceremony would be held, had a series of 15 steps leading down to the stage—and that the girls would start the pageant by proceeding down them. "There were no ramps at all," says Becki, "and no way to come from backstage."

The steps in the auditorium

It was too late to modify the auditorium or switch venues, and things weren't going to work out. "It was heartbreaking for us," said hospital spokesperson Sonya Kullmann. It was more so for Izzi: "Izzi said over and over, 'Mama, I wanna be a princess,'" says Becki. "I told her and continue to tell her that she IS a princess." Pageant directors suggested another pageant that's taking place in February, Miss Branson, that has no steps involved; Izzi will be attending.

The auditorium in question was built in 1985, five years before the passage of the Americans With Disabilities Act (ADA), a civil rights law that prohibits discrimination based on ability in employment, public entities (including school districts), public accommodations and telecommunications. "A hospital is a public place so it falls under Title 3 of the ADA," explains Katy Neas, Senior Vice President of Relations for Easter Seals. Too often, officials in charge of public spaces that were constructed pre-ADA may claim they've never been asked to make them accessible (although the ADA also covers pre-existing buildings). "Unfortunately, and too often, unless people raise a fuss action isn't taken," continues Neas. "Even then, sometimes if people don't threaten to sue, nothing changes."

This may not come as news to those of us who've encountered inaccessible spaces, not to mention inaccessible mind-sets. Perhaps the toughest part of parenting a child with special needs is continuously finding ways to bypass or knock down roadblocks set up by society even as we're steering our kids' development and tending to their needs. And there are many, many roadblocks.

I recently had a conversation with a camp director about the possibility of Max attending the camp for a few weeks next summer, and being in a "typical" bunk with the help of an aide. I was gently told that Max would be best off in the dedicated program for kids with special needs, which is when I explained that Max attends a special-needs school year-round—and that I really wanted him to have an inclusionary experience. He said he'd look into possibilities. I never heard back, so I'll be calling again.

It gets tiring. Why does it have to be so hard? you wonder. Am I asking for anything outrageous? No. Don't I have enough on my hands? Yes. Where is my damn fairy godmother? But then you look at your child and you ache for him or her to enjoy the same events and everyday activities other kids do and have total access to life's pleasures and experiences. And you toss back another cup of coffee and sigh a big sigh and you keep going.


Becki's succeeded in getting all sorts of accommodations for Izzi and her stander. At school, they've changed the layout of Izzi's classroom. "The director of Sunday school at our church has had the maintenance department raise the tables so that Izzi can wheel right by under them," she says. "Even the children's librarians at our local library have ensured that things are accessible for Izzi. So this event of Izzi not being able to participate in her stander is foreign to us."

After writing a letter, Becki has been assured that the auditorium will be modified and that going forward, the pageant paperwork will include a question about needed accommodations. She says that a rep from Mercy Hospital called and asked for suggestions in making sure the facility is ADA compliant; supposedly, the hospital had plans to remodel within the next few years, but is going to speed that up.

Whether or not you're into pageants, the issue at stake is a larger one. "I am calling for parents of physically challenged children to not be hesitant in insisting that their children have the opportunity to participate in events such as this," Becki wrote in an opinion letter to a local paper that ran this weekend.

This is what we do as parents of kids with special needs: We make the calls, we write the letters, we raise our voices, we push and push some more. Says Becki, "As a parent, I've learned that I truly am my kid's biggest advocate."

More power to you, Becki. More power to us all for paving the way for our kids, and the ones who will follow in their footsteps.