A mom seeks justice—and gets an amazing apology 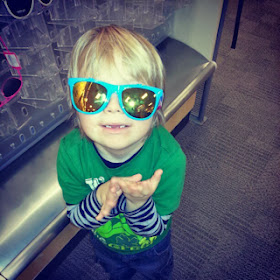 When Kari Wagner-Peck, mom to a 7-year-old boy with Down syndrome known as "T" in her blog, discovered that journalist Chuck Klosterman—who pens The Ethicist column for the New York Times—had a history of using the word "retard" in his writing, she wrote him a letter. "Is it ethical to contribute to the denigration of the vulnerable?" she asked. "Please enlighten me: What are the ethics of using the r-word?"

She never expected to get the astounding response she did.  "I was wrong. You are right," Klosterman wrote. "I should not have used 'retard' pejoratively. It was immature, hurtful and thoughtless. I have no justification for my actions.... I take full responsibility for my actions and understand why this matters so much to you. I'm truly sorry."

Here, Kari shares some background on what went down.

What made you first aware of Chuck Klosterman's usage of the word "retard"?
I googled him when his appointment as The Ethicist was announced this summer out of curiosity because I have read him for years. While I was searching, a quote by Klosterman that refers to "hipsters and retards" came up on some website titled something like Best Hipster Quotes Ever. I could not believe the writer I loved wrote that. Then I discovered he had, for New York magazine.

What went through your mind as you googled and found more instances when he'd used the word?
I thought it was crappy to use these words for the punch line of a joke. All of them were meant to be funny. What stood out was they were beyond the pale. And the excerpts were just hostile.

Have you had to deal with instances of people you know in real life using the word?
Several times. When I hear someone say, "That’s so retarded!" or some variation of that I try to wait until I can speak to them privately. I say pretty much the same thing every time–and I have lost count on the number of times I have had this conversation. I say, "When you said [insert r-word phrase here] I know you were not talking about my son who has Down syndrome. But, I want you to know that word hurts our family." That’s usually enough for the person to fall all over themselves and apologize. I have had a few people start crying. I have had a few people get defensive. To those that get it, I would like to think they stopped saying it but I don’t ask them to. I am having a conversation that is my intention. My husband had an ugly experience a couple years ago. He and my son walked through the door at a holiday party. Our son was immediately engaged by a friend so he did not hear this but my husband overheard a kid whisper to her brother, "Look a retard." My husband said he felt like he had been sucker punched. The other thing that struck him is the kid didn’t sound mean. He really thinks that who our son is. He was completely ignorant.

What were you hoping for when you wrote Klosterman?
First, I wanted an answer to my question. I incorrectly assumed he would make it about political correct speak and that I am over-sensitive. So there you go, don’t judge a book by his cover—or the author by his words. If he had come back that way my hope was for dialogue.

What was your reaction when you saw first Klosterman's email in your in-box, and as you read it?
Well, first he actually emailed me two after I posted the letter but it went to the SPAM of my blog email! I hammered away at him with other on social media for another three days! He must have been like, "What does this mother want from me!" I had sent an email to the Public Editor at The Times, Margaret Sullivan. She emailed me back and asked if we could talk on the phone. She told me Chuck Klosterman had emailed. She then relayed to him what happened and he re-sent the email to my private account. As I read it I burst into tears. I was completely overwhelmed. I still get choked up when I read it. What he wrote and did is beyond anything I could have imagined or has been done in the struggle for people to get it. He is a game changer.

Klosterman offered to donate $25,000 to a charity. Where is that going?
He offered two places in his letter as example but it was clear whatever I said would go. One of the places is totally inclusion-based. They also do excellent legislative work. It felt like we were on the same page. He sent the money out that day. It is his money and his donation—he created a self-imposed debt. Where it went is private unless he chooses to share the information.

What do you have to say to naysayers out there who say things like "Stop being so sensitive!" and "It's just a word!"
I have no interest in addressing them. My energy is limited—I am raising a kid, I have a job, I write, I have a life. My energy is for moving the conversation forward with whoever I think can help me. The reality—the word is a reflection of how we view "these people." That is true whether someone means that when they use the word or not.This sounds very grand but my goal is to help change the world in favor of people like my son. I cannot be pulled down by people who want to plant their flag on saving a hateful word.

Someday, when T grows up and can read this, what do you hope his reaction will be?
Seriously, I hope it’s something like, "What else would I expect from you? You’re my mother." This is mother’s work. This is my real job. Your kids aren’t supposed to throw a parade every time you have their back.
Ellen Seidman at 6:40 AM