A dream job working with kids who have special needs 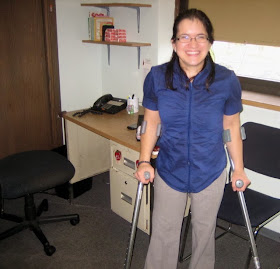 This is a guest post by Laura Nunez, a social worker at The Whitestone School for Child Development in Queens, NY, a special education school that serves children ages 2.9 to 5.

I have always been a dreamer. When I became a social worker, I did so because I wanted to make a difference. My goal was to impact the lives of differently-abled children; I wanted each child that I worked with to know that they are not defined by what they cannot do or some obscure medical term.  I wanted each child to know that they are cherished and valued. You see, I was born with cerebral palsy.

I can’t lie: Life can be hard and there have certainly been times I have literally been in tears. I know what it’s like to be judged by others and to have to overcome obstacles and stereotypes. I have come to understand that the world is not always fair. Despite my best efforts to blend in and not be singled out for being different, people do indeed judge and at times try to set limits to what they think I can do. And now I’m going to admit something totally crazy, something that may not make sense to you: My disability, my crutches, are a gift.

I have a new job. I love, LOVE my job at Whitestone School for Child Development, a Committees on Preschool Special Education (CPSE) preschool in Queens, NY. I have always dreamed of working in a preschool because I love children and I have always wanted to use my disability to positively impact others.

I attended a CPSE preschool and know that I am where I am today, in part due to the services and early intervention I received there. While my memory of those days are fuzzy, I remember my teacher, Miss Jody (yes, I still remember her name) and my therapists were also great. I had a lot of friends who were just like me and no one judged me, made fun of me or left me out.

When I entered kindergarten, I attended Henry Viscardi School, a school for the disabled founded by Dr. Henry Viscardi, who also had a disability. I remember seeing him in the hallways and hoping to one day be like him and help others. As I got older and truly understood how much he had done to advance and advocate for the rights of people with disabilities, the more convinced I became that I wanted to be like him and leave a mark.

There’s something that I was not prepared for, being denied opportunities because of my disability.  I was raised in a family where I was no different than my siblings. My mother has always been my greatest ally and advocate but she also believed in being honest with me. “You have to work harder and do better because people will judge you” she’d tell me, followed quickly by “but you can do anything if you work hard enough.”

While the first half of her statement always annoyed me, I always believed she was right, that I could do anything. I also went to amazing schools and had great teachers who also made sure I was never treated differently, so I grew up assuming that all of my dreams would come true as long as I did my best and worked to make my dreams reality.

Reality isn’t that simple; people are not always nice. I’ve been on more than one interview where people made it quite obvious that my crutches made them uncomfortable. I soon learned that my mother was right. It seemed that my dream of making a difference would never come true. Every time I thought I’d found the perfect job, I’d hit a brick wall. My crutches always seemed to get in the way, be the “elephant in the room.” I had always believed that I could do whatever I wanted and that if I worked hard enough, I could achieve my dreams. Out of my own naiveté I had never really seen my crutches as an issue. I am as independent as I can be and I have never let crutches stop me.

I was beginning to question if I was ever going to be able to make a difference when I got the phone call to come in for an interview. I was excited but hesitant. I was convinced I was going to hit another brick wall. Boy, was I shocked when two days after the interview I was offered the job!

I have finally come full circle working at Whitestone School. I am finally in a place where people don’t stare at me or refer to me as "the girl with the crutches" and I don’t have to explain myself.  I walk into a classroom and the children shout, “Hi, Laura! Come play!”

I may never know how much of a difference I am making in their lives but I certainly hope that they all come to understand that they are amazing and so very capable of achieving their dreams. I hope that in my own way, I am giving back to all of those who gave to me, who helped me get to where I am today.

Now do you understand why I say my crutches are a gift? They don’t define me, they are not who I am. It is my hope that when people see me they see the person I am: Someone who is truly happy and grateful for the opportunity to positively impact others and just maybe, leave a mark. Yes, I still dream big!