Your child could change a world 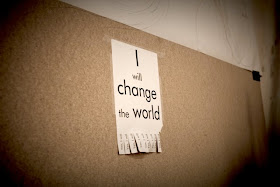 One of Dave's friends came to visit this weekend. He has a 6-year-old who doesn't know Max well. At first, he was wary of Max. He even cried when he first saw him. "I'm scared of him!" he said. But as the day went on, this other boy grew less timid. He started asking questions about Max, like "How does he get down the stairs?" They watched Finding Nemo together. Max showed him his speech app and told him about his big plans for his birthday party. When Max invited him to it, he said yes.

Perhaps my son won't grow up and change the world. (How often does that happen? I'm not raising The Buddha here.) But this weekend, Max changed a world—the world of another child who doesn't know much about people with special needs.

"We have known for some time that integrating children with disabilities into the regular classroom can improve attitudes," noted study author Megan MacMillan, of the University of Exeter Medical School in England. "What we have established here is just how much of a difference a greater presence in day-to-day life makes."

Surprising, this isn't; it's common sense. But I think it's something we may forget as parents of kids with special needs. At times, we get crushed by the stares and the gawking. We see only the barriers. But breaking down that invisible wall could change other children's perception of children with special needs. It could make kids more generally open-minded. It could make them better human beings. Who knows what it could do.

Over the years, people who know Max have spoken of his infectious cheerfulness. Yes, he is one happy child, though I believe the impact he's had goes way deeper. I can't verify it, like the study authors can, but I know that he has changed perceptions people have of kids with special needs.

Of course, this doesn't happen instantly. Sometimes, it's just the opposite. Last night, a father and his sweet three-year-old showed up at our door. I knew the dad only through a local Facebook group, and he'd done me a favor of cutting up some extra butcher block I had; he'd come to return the pieces. In his excitement, Max grabbed the little girl by the shoulders and tried to pull her inside. She got scared. "It's OK, he's very friendly," the dad said. They left to have dinner. It's going to take awhile before this girl  understands Max, but once she does I'm betting it will impact her perception of other kids like him.

"Change your thoughts and you change your world," Norman Vincent Peale once said. Every single time a new kid meets Max, Max has the chance to change a world. And your child does, too.