Parents who run races with their kids with disabilities 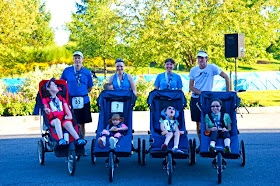 This guest post is from reader Barb Williams, mom to Rhys, 10, who has cerebral palsy, global delays and Cortical Vision Impairment. This year, the two of them started running in races (that's them above, second from right). "Cognitively, Rhys is at a level with his peers," says Barb. "He uses a Dynavox Eyemax for school work, and can verbalize a 'yeah' and 'uh-uh.'" The family lives in Oneida, New York; Barb and her husband work for the quality control lab of the local dairy processing plant, each on different shifts. The family has two labs. "The younger one loves to run with us," says Barb. "I am sure we make quite a sight running down the street!" Here's her amazing story that could just inspire you to take up running. 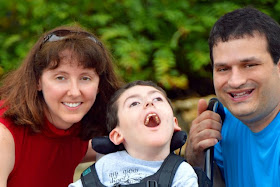 Last spring I decided to go to the doctor because I was bone tired exhausted. After running a bunch of blood tests to rule out several things my doctor tells me it is stress. He says, "Hey, you have a special needs child and work full time, your stress level is very high. You need to find an outlet. Maybe you should try walking or working out."

In my mind I hear hysterical laughter because me and working out go together about as well as the North Pole and penguins. But to prove him wrong I start walking around the neighborhood three days a week. And darn it if I don't start feeling a little better. Sometimes I hate when he is right.

So after a month of walking there is a big local race on TV and as I am out walking along I start to wonder if I  could run a block. So I give it a try and hey, what do you know, I made it! And best part, I didn't keel over! Then a friend tells me she ran in the 5K at that big race and I should do a 5K too because you know it's only 3.1 miles. Again, I hear that hysterical laughing in my head, but I decided to try to do that distance in my neighborhood. I wanted to die and kept thinking "Yup this is going to kill me." But then I finished and realizes I did it under 50 minutes first time out. Which admittedly is slow, but hey I did it so yay! So I decided to increase my walks to run/walks and once a week threw in a 5K distance.

After a few months of that, I realized that I was less tired and had more energy to do things with my son. I was happier in general because I felt better. Bonus Some of those pounds that I had been trying to shed forever finally started to come off!

So in a moment of bravery (or maybe insanity) around Christmas I  signed up for a 5K. Then I realized I must be crazy because hey, I am not really a runner. I am more of a plodder around kind of person. But I've committed to it so now I've got to do it. I posted about it on Facebook so that my friends will hold me accountable and make me do it.

Then one special friend from Colorado asks me if I've ever heard of Athletes in Tandem. Nope never, but I look them up and find out that they do some pretty cool things with special needs athletes. They get them out having fun. Give them a chance to compete in road races, dualathlons and triathlons. They give them a chance to focus on something fun and not just medical stuff. But I didn't see where they are doing anything in my area so I emailed the founder, Dennis Vanderheiden.

I ended up hang a very nice conversation with Dennis. He started Athletes in Tandem two years ago, motivated by Dick Hoyt, who pushes his son with CP, Rick, in races. We talked about the possibility of starting a chapter here in central New York. I admitted to him my lack of experience in anything involving athletics. He said we can work around that. Told me where I could find a jogging stroller. So on July 4 of this year I started running with my son. Again I thought that this would be the death of me. What I've discovered is that running with him is so much more than I ever thought it could be.

I hook up my iPhone to the handlebar and we listen to a hodgepodge of music. We get updates from my Map My Run app that tells us how far we have run and how fast (or slow, as the case may be). He laughs when I say how slow we are going. He yells at me when I start walking—then laughs when I tell him to quite complaining I am dying back here!

On Saturday Aug 3 we attempted and finished our first 5k. It was supposed to be a nice small local 5K. It was small and local. It was nice. It was harder than hell! It is called the Grizzly 5K in Manilius, NY, if you want to do a super hard run. I had no idea the hills that were on this course. I would have had a hard time doing this course without Rhys. But I don't think I would have finished without him either. I wanted him to cross that finish line. I loved his smile when the volunteers would cheer us on. So we finished in 46:05. Never been so happy to cross a finish line in my life!!!! 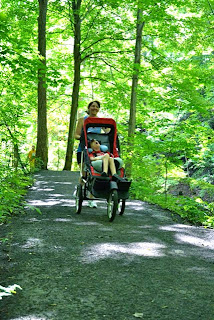 This is us about 2.8 miles in I'm smiling because I can hear the music at the finish, so I know it is almost over at this point.

Then we got permission to run in another local small event that doesn't normally allow jogging strollers, but they made an exception when I wrote to the event organizer and explained that I wanted to push my non-mobile, non-verbal son. This race went better as it was super flat and it was a cool morning. Our stretch goal was to finish in 40 minutes; we killed that at 37:45! Best part was my husband had the day off from work so he was there to cheer us on. 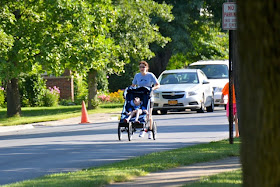 Then on August 24, we raced in the Turning Stone Races. Dennis flew in from Colorado to help us try and kick-off our chapter. We had four teams that ran in the 5K and two teams that would be running the half marathon on the 25th. As we were unloading equipment to get ready for the race a woman comes up to me and introduces herself. She says, "I saw you race the week before." She wants to know if there is a way she can help push in future events so I start to tell her all about Athletes in Tandem. Turns out she is a triathlete and not only wants to push in road races, but wants to help in tris as well. So a great start and we haven't even run yet! 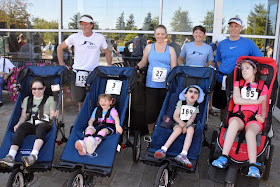 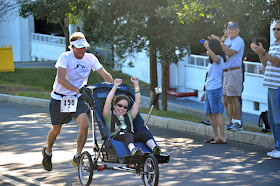 Dennis and Becky finished so fast that she won overall female.

The race organizers had us register the kids as individuals, but that back fired when Becky won as some people grumbled that she shouldn't have been awarded a prize as she didn't actually run. So to solve this problem, in the future we are registering just one bib number an driving the kids any swag that comes along with it. Oh well haters are gonna hate right? 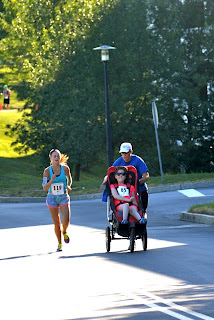 Howard and Emily finished in 27:38—a very respectable time!

Jen/Abby and me/Rhys finished together in 37:07—first time Rhys and I ever finished in less than a 12:00 minute mile so I was excited.

My husband told me that there was a guy who saw us coming around the corner at the finish and yelled out "Here come the wheelchair people…. everybody yell" and I can tell you they did. It was amazing the cheering, and Jen and I both choked up as we crossed the line. It was so emotional to push him across that line because all of our friends and family were there waiting. All of his grandparents were there cheering for him—just priceless.

Here are the photos of Jen I and finishing with our kiddos. 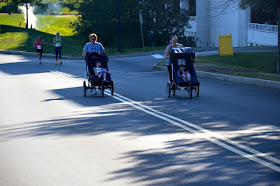 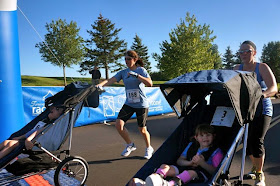 The next morning was the half marathon and Dennis pushed Rhys and Howard again pushed Emily. These guys were amazing! The 5K was at 5 pm on Saturday and the half was the next morning at 8am. I barely can finish a 5k and then to turn around and do a half (13.1 miles!) pushing someone else—just amazing. Even more amazing is the woman who stopped me in the parking garage for the 5k ended up pushing Abby in the 10k on Sunday morning. Again another amazing individual! 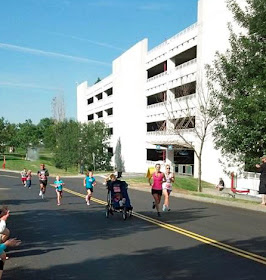 Here is Kathy and Abby finishing. Kathy is such a class act that she gave up pushing Abby across the line to let her brother do the final push. Not a dry eye in the crowd, I tell ya! 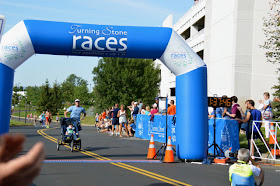 Rhys and Dennis finishing—check out his insane time! 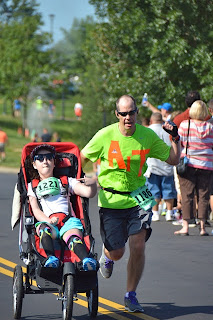 Howard and Emily finishing the half; her face says it all!

My son's general education teacher came up to us after the half as he had just finished. He said to Rhys, "Well you and I are going to have a lot to tell the class on the first day of school this year! Be sure to bring in your race medals so we can show them off to the other kids!"

So now Rhys has a "typical" thing to share with his classmates this year. We have at least four more races this year as long as he stays healthy. So nice to have things to look forward to that don't involve doctors or therapy appointments. So nice to have my son get so excited about going out.

If you are interested in finding out more information about Athletes in Tandem, look them up on the web or on Facebook, or follow them on Twitter. You can also reach out to Dennis Vanderheiden at info@athletesintandem.org or at (970) 217-6751.

Athletes in Tandem has chapters in Fort Collins, CO and Louisville, KY, and they are trying to start ones in Boise, Idaho and in Syracuse, NY. It is a non-profit organization and donations are always welcome as the jogging strollers alone cost about $900 a piece.

Even if you don't have an organization like this in your area I encourage you to get out there and do some kind of athletic activity with your child—you will both get a lot out of it!
Ellen Seidman at 6:40 AM