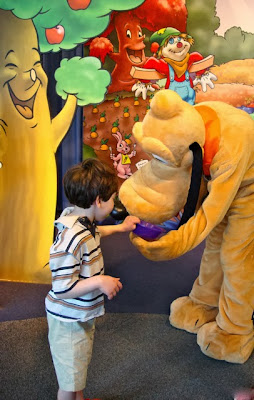 When word got out last week that Disney is changing its program for people with disabity at Disney World and Disneyland, many parents of kids with special needs wondered what it would mean for their families' experiences. What's left me even more concerned: The rude, ignorant and insensitive comments people have made. Ones like nobody should get "special treatment" at Disney and that parents of kids with special needs are "over-entitled." Some people have questioned why parents would even bother to take their children with special needs to Disney, given the noise and crowds. Others noted that we should teach our children to wait. Meanwhile, the media's run headlines such as "Disneyland: Disabled Will No Longer Skip Lines," as if our kids are outright cutting lines.

So, OK, let's talk about kids with special needs and special treatment.

Why do kids with disabilities have issues at Disney?

It depends on the child. Max has both cerebral palsy and sensory issues, because of his neurological condition. Like children with autism, he is startled by loud noises or din. Crowds freak him out, even the mere sight of them. He starts to cry and screech, unnerved, upset and scared. This is the way it often goes at restaurants, museums, events and until recently, our place of worship. Noise-blocking headphones help, though not always.

Max's CP means that his muscle have to work harder than other children's do. He walks well but it takes a lot out of him; when Max falls asleep at night, he is usually exhausted from all the energy he's expended even if he's done nothing but go to school and come home. If he's standing around for long periods of time, his muscles can tighten up and it's uncomfortable, another reason why a long wait on a line could pose problems. We use strollers on trips, but at Disney it hasn't mattered because Max still freaks about the throngs of people on lines.

That's my kid. Other children with disabilities and medical needs can have problems with body-temperature control, epilepsy and extreme anxiety, to name a few issues that make waiting on a line unsafe or impossible.

Can't you control your child?

This isn't about bad parenting; this is about how a child's brain is wired. If I could coax or teach my son to be less scared of crowds or noise, or there was some therapy that did the trick, trust me: I would have done it. Why wouldn't I? It would better his life, our family life, my life.

Then why would a parent bring a child who has endurance or sensory issues to Disneyland or Disney World, two super-crowded, noisy places?

Even though kids with disabilities may seem seem unlike other kids because they speak, walk, behave and think differently, at heart they are still kids. They like to go on rides, just maybe not the dark or loud ones. Plenty love Mickey, Minnie, Goofy, Donald Duck, Daisy D., Tinkerbell, Cinderella, [insert favorite Disney character here]. Some, like my son, can be obsessed with them; Max thinks he and Lightning McQueen were separated at birth. Our kids may genuinely want to meet up with these characters, although they can get overwhelmed when it actually happens.

Parents of kids with special needs are like other parents, too. We want to make our kids happy, along with their siblings. So we're game to try Disney even though it's one expensive crapshoot. There is no trip-cancellation insurance you can buy in case your child with special needs refuses to enter a theme park, as happened to us once (at a local place, thankfully) or vastly prefers the hotel room to the resort (our first experience at Disney World). But off to Disney we go with noise-blocking headphones, hopes for the best and reassurance that there are accommodations for our children's needs.

How exactly is a special pass supposed to help with a child's special needs?

We've gotten a General Assistance Card (GAC) each of the two times we've taken our kids to Disney World. They enabled us to go through an attraction entrance other than the main one, where possible, and to use Max's stroller as a wheelchair so we could get closer to the start of rides. 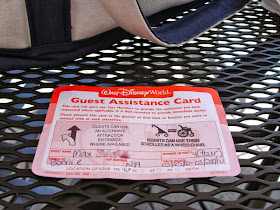 Disney staffers typically let us in through an alternate entrance or an exit door, where we'd wait for a bit to get on a ride or meet characters. Sometimes, we ended up on the Fastpass line. We skipped shows entirely because Max was terrified. Was I gleeful that we avoided major lines at the attractions? No, I was relieved, because there was no way Max would have endured them. A quieter, low-key, quick entry is what it takes for my child and many others to experience attractions at Disney. As writer Shannon Des Roches Rosa, mom to a son with autism, said in a post, "Our love of the GAC is not because we get to skip lines and blow raspberries at all the chumps who don't. Skipping lines is not a convenience but a necessary accommodation for our boy."

Isn't the new Disney system of giving people with disabilities a designated return time more "fair" than allowing them to go directly to a ride?

Disney has stated it's changing its program for people with disabilities because of the widely-reported abuse of it—not because they considered it "unfair." For people who think, We both paid Disney the same amount for a visit and those people get to go in quicker—not fair!, here's another thought: Being part of a civilized society (and being a decent human being) means accommodating people of all abilities. We have accessible ramps to buildings, elevator buttons with braille, closed captions on TV; allowing kids who have issues waiting on line speedy access to rides is another kind of accessibility. Just how the new Disney system for visitors with disabilities will provide the accommodations certain kids need remains to be seen.

If parents of kids with special needs expect accommodations for them, how can they also wish that people would treat their kids like other kids? Isn't that hypocritical?

Actually, they go hand in hand. I ache for people to see the ability in my son's disability and treat him like other kids, rather than staring, pitying him or both. Yet in order for him to be more like other kids—and enjoy the same pleasures in life—he may need extra help at times. Accommodations do not make him separate; they make him more equal. They enable him to have the fun other kids do. And at Disney, they make his dreams come true.