Dear President Obama: My child with special needs has so much more than "grit" 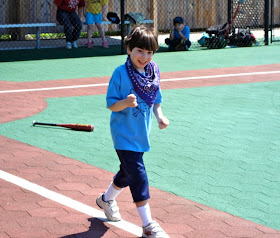 I was excited to hear that you're going to be honorary chairs of the 2015 Special Olympics World Games, scheduled to take place in Los Angeles starting July 25 2015. This is B-I-G. The games, the Special Olympics announced, will include about 7000 athletes with disabilities from 170 countries around the world, and an anticipated 500,000 spectators. You'll bring extra attention to what's going to be the largest sports-and-humanitarian event anywhere in the world that year.

You expressed admirable enthusiasm in your video statement: "The athletes coming to these games represent the grit and determination that is at the very root of the American spirit. They keep working when the challenges seem greatest...they see opportunity where some see limitation. They represent the very best of the human spirit."

Now, this is a very true sentiment as I know from raising my son, Max, who has cerebral palsy. I have never seen so much determination packed into one little body. I can picture Max as a two-year-old commando crawling along the floor of our home, like an army soldier, getting around as best he could when his arms weren't yet strong enough to hold him up. I can picture Max today going up stairs, carefully holding the rail, every move measured. Of the many kids with disabilities I have come to know over the years, a can-do spirit is one commonality they share.

But with all respect here's the thing you—and many others—need to realize:

Our kids have so much more than determination. Focusing only on their grit undervalues their abilities.

Athletes who compete in the 32 Special Olympics summer sports have real prowess. Like Abdel-Raman Hassan Al-Hemdan, a swimmer with intellectual disability from Saudi Arabia who is also partially paralyzed. At 10 years old, he scored gold medals in the 25- and 50-meter races at the World Summer Games in Shanghai. 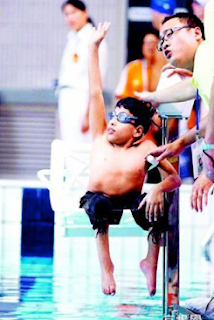 Obviously, this was quite the feat; his father has said that it took him a year of training to cover a distance of one meter. That's exactly what athletes do: They train. And then, the best of them win medals, as in any athletic competition. This is because they are both competent and able. This is something us parents of kids with special needs ache for others to see. As Abdel's father described his wins,  they're "a message to show the world the real abilities of this intellectually disabled child."

Parents of children with special needs are fully aware that our kids have real abilities. Not just ones that stand out in spite of their disabilities, but in their own right. Some may have athletic talents. Some may have creative ones. It depends on the kid, as it does with any kid. My Max has yet to compete in Special Olympics activities but he sure can run. That's not to say that in a race he'd beat other kids who do not have CP, but still, it's not just determination that's helping him sprint to first base when he's played on a Little League Challenger team.

This is something people tend to forget about kids and adults with special needs. They focus on how amazing it is that they're doing anything, period, let alone doing anything well. Would you ever release a statement solely about LeBron James' grit? Or gushing only about Lindsey Vonn's spirit? Would you use this as the lone description for any athlete this way competing in a national athletic event? I suspect not.

Our kids have to leap over many obstacles to get ahead in this world, and people do them a disservice when they focus only on their drive. So here's my simple request: When you chair the Special Olympics, give the athletes props for their spirit and skills. Encourage the world see all the abilities in their disabilities. Cheer them on as you would any athletes.