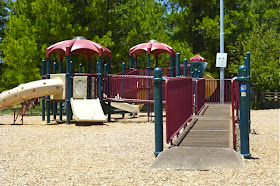 Question: How many parents does it take to build an accessible playground for kids with special needs?

Answer: Two—or even just one—for starters. At least that's the trend. This week NPR ran a great story about Jonny and Melissa Fisher of Pocatello, Idaho, who built Brooklyn's Playground. It's named after their 7-year-old with spina bifida. Several years ago, her father put her in a regular swing at a playground; she flew out of it and hit their head, which is when the Fishers decided to build a playground for her.

They set about raising money, helped by a local civic group—from grants, bake and garage sales and donations. They raked in $580,000. As NPR reports, 3000 people showed up to build it, finishing in a week. Now, a California mom is doing the same for the sake of her daughter with spina bifida; so far, she's raised $400,000, NPR reports.

LOVE it. Our neighborhood doesn't have accessible playgrounds so Dave and I are basically Max's adaptive equipment, although hopefully that situation will change in upcoming years. Last year, updated Americans with Disabilities Act Standards for Accessible Design went into effect for public recreational areas including playgrounds. Any new construction or playgrounds getting renovated must comply. Sadly, the reality of shrinking local budgets is another story—ditto for cities' actual compliance (for more on that, see part 2 of NPR producer Robert Benincasa's investigation, New Accessible Playground Rules May Not Go Far Enough).

Meanwhile, parents are stepping up to the plate (and the swing and the slide) to work with nonprofits on building inclusive playgrounds (see resources below). In the near future, 26 very special universally accessible playgrounds will be completed. Built by The Sandy Ground Project: Where Angels Play in Connecticut, New Jersey and New York, they'll honor the children and educators who died at Sandy Hook Elementary in Newtown. So far, seven have opened, and two more are set to be built in September. Dedicated in June in Westport, CT: a playground for Dylan Hockley, who had autism and liked to flap his arms and pretend he was a butterfly. There's lots of purple, his favorite color—and butterfly designs.

To find accessible playgrounds near you:

• Playgrounds For Everyone is NPR's brand new searchable site/app; users are encouraged to list any accessible playgrounds they know of that are not included.

• Accessible Playgrounds has lists of sites by state in the U.S. and provinces in Canada.

For info and guidance on building accessible playgrounds:


• Boundless Playgrounds is a nonprofit that works with communities to develop accessible playgrounds; it's already helped build 200 in the United States and Canada.

• Shane's Inspiration, started by parents who lost their son to spinal muscular atorphy, has developed more than 40 universally accessible playground projects throughout Southern Calfironia and as far away as Sri Lanka, and offers consulting.

• Kaboom, a nonprofit dedicated to creating playspaces through the participation of leadership communities, has an accessibility section with guidance on planning an inclusive space in a community.

Last, this site has an extensive list of playground equipment grants and fundraising resources.