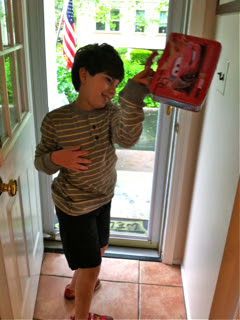 In recent years, Max has had many objects of affection: The plastic bowl, plate and cup he liked to sleep next to. The Cars 2 CD player we got for his birthday that he'd literally just sit and gaze at in awe. A purple Halloween pail he took everywhere, including school. A gigantic purple bowl he painted at a pottery place that we once had to bring on a hike.

And now, Max is glued to a Cars 2 tin lunchbox. He literally won't leave home without it. We'll almost make it to the car when all of a sudden he'll announce "Lunchbox!" (sounds like "uh-ah!") and one of us will have to run in and get it. The lunchbox contains a carton of chocolate milk and an applesauce cup, in case of snack emergency. Max has never once touched them; he just likes toting them around. And not for nothing, clutching the handle does his fine-motor skills good.

Max took his lunchbox to Sabrina's cabaret show this weekend. She's been in a performance class and they were singing Thriller. Max has gotten comfortable going to his own school shows, but he's never attended anything Sabrina's been in. Armed with his trusty headphones and lunchbox, though, off we went.

Max hovered in the back by the door, just in case he had to make a quick getaway, but he stayed in the auditorium. He showed a few people the lunchbox so they could see how cool it was. He watched the show in fascination. He stayed the entire time—and then he didn't want to leave.

I've got to figure out more ways to take advantage of his new lunchbox confidence.