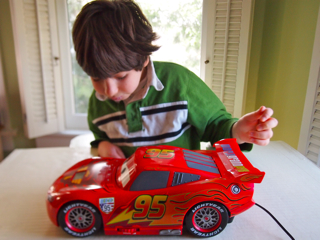 "Max, do you know that you have cerebral palsy?"

It's twilight, my favorite time of day. I am lying next to Max in bed, and we are talking about important things—his next birthday party (which he started planning the day after the last one), summer vacation, his reluctance to return to school after spring break.

In recent months, Max has made all sorts of progress: potty training, handwriting letters, reading. At times, I can practically see his wheels spinning. Which for me has had the effect of making the elephant in the room, his cerebral palsy, even larger. I often wonder if Max understands what it is, or recognizes that he has special needs.

I have never had a full-blown discussion with him about the CP. Just little comments here and there like, "Max, that girl has cerebral palsy, like you do." I show him other blogs by parents of kids with CP. We've got a couple of books about characters and real-life kids who have CP, but he hasn't really been into them.

Sabrina knows that Max has cerebral palsy. Cognitively, I think, Max is able to understand. And I want him to own it. I'm not worried that it will make him doubt his abilities; Max only knows the word "can." When I watch him trying to keep up with other kids on the block, he just does his best. He's never put out that he can't pedal as fast. He's just happy to be cruising down the block on his bike.

And so, I ask: "Max, do you know that you have cerebral palsy?"

And I go on, "Max, when you have cerebral palsy, it means your muscles don't always work the way you want them to. Like when it's hard to pick stuff up. But usually you figure out a way! Right?"

Max looks at me and sorts of nods. I'm not sure he's following.

"Max, does Sabrina have cerebral palsy?" I ask.

"Max, does C have cerebral palsy?" I ask [that's his best friend at school, who has Down syndrome].

"Max, does M have cerebral palsy?" I ask [that's another kid in his class, who does have CP].

"Max, does Lightning McQueen have cerebral palsy?" I ask, smiling.

"Eeeyah!" Max says, and he giggles.

This is just the start of many conversations, but I have my answer for now. Max is mature enough to get that he has cerebral palsy, and still young enough to think that Lightning McQueen can have it, too. And that's fine with me. Because if Max believes that super-cool Lightning McQueen has CP, then to him having CP must be utterly, perfectly OK.
Ellen Seidman at 6:54 AM