Max is a Fruit Ninja, and I am his Samurai Mom 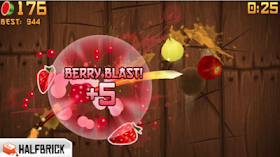 Sunday afternoon, we were all chilling in the living room, glued to various screens. The kids were on playing games on the iPad and computer, Dave and I were in the HGTV zone.

Sabrina: "Hey! Max is better than me!"

I walk over to the couch to see what she was talking about. Max is playing Fruit Ninja; the goal is to use your finger to "slash" assorted flying pieces of fruit. Ordinarily, a game I'd consider pretty ridiculous except Max's agility with his finger is kind of amazing. He zooms all over the screen, slicing fruit left and right. Adeptly. Precisely. Quickly.

Max's destiny as a Fruit Ninja was not always clear cut. Back when he was a tot and he wanted to point at something, his brain just wasn't able to get the right message to his finger ("YO! BUDDY! POINT!"). Max's version of pointing was basically an angled fist.

Over the years, with lots of coaxing from occupational therapists and hand splints that helped isolate his thumb and index finger and eased the spasticity, the agility came along. One therapist took to using Coban wrap, winding it around the base of each finger to separate them. I played my part, too: the countless times I grabbed his chubby little finger and positioned it to point, all the "Max, point your finger, you can do it!" coaxing and cheering.

If you had told me before I had kids that the mere act of pointing a finger would prove to be a major feat, I wouldn't have understood. It's another one of those things you never think about until you have a kid with cerebral palsy, at which point you become hyper-aware of every muscle movement. Since I've become Max's mom there have been times when I've just sat at my desk, wiggled my fingers and marveled at how they move.

Pushing to get Max a speech communication device helped, too. At his old school, I had to beg for a Dynavox; the head of the speech department wasn't sure he was "ready" for it. I said, "How will you know if we don't try?" That was the tipping point when I realized I needed to get Max into a more progressive school.

He got a Dynavox, which helped not just with speech but with isolating that pointer finger. He can do it on both hands, but his left one is the more functional one of the two. He got even better at finger-pointing when the iPad and speech apps came along because he was so motivated to use them. These days he's typing letters and full sentences, and surfing YouTube on his own. And now, he's a veritable Fruit Ninja master!

The finger still isn't the strongest; when Max goes to press an elevator button, he has to do it several times. For his birthday, I got him a Lightning McQueen camera he wanted; he loves it but he can only pretend to press the "shutter" because it's too stiff. Sometimes, he'll give up on using the tip of his finger and just knuckles it. But what works, works (the running theme of my life as a special needs mom).

Sabrina definitely seems surprised by the fact that Max is a superior fruit warrior than she is. "You know how we talk about how everyone has their special talents and abilities?" I tell her. She nods. "Well, this is one of Max's talents! He's a Fruit Ninja!"

She laughs, I laugh, Max laughs.