Kids with special needs abandoned on school buses: Why is this happening? 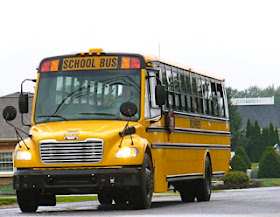 I read the story the other day and felt sick to my stomach: An 11-year-old kid in New York with special needs en route to school never got to class. That's because his driver and aide forgot he was on the bus, parked it and left him in the cold. He was found two hours later. Earlier in the month, a similar incident occurred with a New Jersey 8-year-old boy with special needs, only he was trapped in the bus for five hours. Asked what he did, Anthony Suarez said, "I prayed... I talked to my heavenly father."

It seems like this country needs a new law: No child left behind in the bus.

I've been tracking this phenomenon for a couple of years now, and incidents remain rampant. Google "child with special needs left on bus" and you'll see what I mean. Drivers for a bus company in Cary, North Carolina were recently suspended for leaving two kids with special needs on the bus after finishing their routes. Earlier this year, a driver left a four-year-old in Oakland, Michigan on the bus one school day morning. The little boy proceeded to get off the bus and wander around the neighborhood. In December, a three-year-old with special needs in Riverview, Florida sat on a bus alone for the better part of the school day. The State Attorney charged the bus aide with child neglect.

Some of our children are unable to articulate words. Some can't move themselves. Many are completely dependent on drivers and aides. This is the most simple problem in the world to prevent: Do a head count on every bus run. Make sure all those children are off the bus. Bus companies need to hold employees accountable for the children they transport, and make them aware there are real consequences (and possible criminal charges) involved. I am not so sure this is happening.

Max has had the same driver for several years, and she is wonderful. That said, the bus company she works for is less so. We had one incident in which an aide on the bus was strapping Max in incorrectly and squishing his legs, so much so he was hobbling when he got off the bus. I wondered what sort of oversight existed to make sure aides were properly trained. Last week, Max's usual driver was out sick and it was snowy; the aide on the bus called 40 minutes after the usual time Max was due home. Why so late? Because she did not have parents' phone numbers; they were all on the cell phone of the driver who was off. Really.

I tell you all this not to scare the heck out of you or to encourage you to yank your kids off the school bus and drive them yourself. But you can look into the safety measures your bus company has in place. When I emailed our district coordinator about the above incident, I asked her to look into making sure the aide on Max's bus has a list of parents' phone numbers. And I also asked her to let me know what protocols the bus company has for checking that all kids are off the bus when they get to school. You never know.

Ask your school coordinator or whoever the right contact is about this stuff. Yes, it's one more thing to do. But this, you need to know.