On proving your child's worth to the world 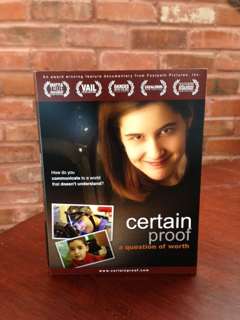 One of the most Sisyphean roles of parenting a kid with disabilities is helping people see their abilities. If your child has challenges with speech or physical disability, as Max and other kids with cerebral palsy do, it can be even more of an uphill battle as others may take their differences to mean they lack smarts and comprehension.


That's a running theme of Certain Proof: A Question of Worth, a powerful documentary directed by Ray Ellis and produced by Susan Ellis, his wife. The couple followed three mothers and their children with severe cerebral palsy for two and a half years, detailing their experiences in public school as they "proved" they were capable of learning, just like any other kid. The results are eye-opening, thought-provoking, moving and deeply disturbing.

The national television premiere is this Sunday, March 3 at 8:00 PM ET on STARZ Kids and Family Channel. Here's a trailer:


As you watch Josh, 6; Colin, 10; and Kayla, 12 in their classrooms, the challenges they face quickly become clear. "It's hard when people around us don't think he's in there," says Dawn Werner, Josh's mom. "The world assumes he can't learn, that's the danger. Why not assume he can understand everything?" The mothers are relatable on so many levels. You ache for them because you are them, that mom so hungry to enable her child and help him achieve his best.

It's distressing, too, to watch teachers and therapists trying but failing to engage the kids. ("Whenever I start at a new school, they look like a bomb hit them," notes Kayla.) You come to realize that the children are bored. They are not being mentally stimulated. They are frustrated.

Certain Proof raises major questions about the education of children with special needs, and makes the case for inclusionary classrooms for the sake of the kids and society, too. "Moving as many kids into regular education benefits the total population so much better," says Kayla's mom. "We have to find a way to promote them and make them as self-sufficient as possible." Notes Karen Erickson, an expert who studies children with disabilities, literacy and communication at University North Carolina, "If these children with severe disabilities are educated in a completely separate environment, they will never have opportunities in the community when they leave and they will have to have systems of separate service delivery for the rest of their lives."

Max's IEP is coming up next month. First, though, I am going to be sharing my copy of the DVD with our district coordinator, and again broaching the topic of placing Max in an inclusionary setting. But there are variables to consider with these decisions, which the film doesn't get into. For us, they include the quality of therapists and aides in our local schools (a couple of years ago, they fired the longtime aides and hired hourly-rate staffers of dubious quality). Also: We adore Max's school, and he's doing really well there.

Ray Ellis was gracious enough to offer four copies of the documentary to give away. If you'd like to enter to win one, you can privately submit your name and email via the form below. I will randomly choose four winners by 3/8 at midnight, announce them here and alert you by email. The DVD can be also purchased here for $19.95, plus shipping and handling.

I asked Ellis how making the film changed his perceptions of kids with disabilities. "I did not understand how trapped they were in their bodies," he says, "and that they are being held to a different set of standards and being asked to prove themselves over and over again. We almost named the film 'The Least Dangerous Assumption'—assume all children understand you and can learn. That is the only way not to limit their potential."