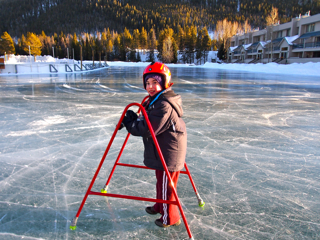 Max has been getting gutsy about trying new things. Maybe it's the confidence that comes with getting older, or that he's getting more in control of his body. Whatever the reason, it's awesome.

Monday afternoon at Keystone Resort, the awesome family resort we recently visited, Sabrina and Dave had plans to go ice-skating. I was going to ride a ski gondola with Max (a favorite activity) except he decided he wanted to try skating. Our condo looked out onto a beautiful frozen lake; Max had been watching skaters twirl around for days.

Thing was, I knew he wouldn't be able to hold himself up on ice-skates. Not because I doubted his determination (that, I have no doubts about) but because I knew he'd have issues with balance. But into the ice-skating center we went.

Max immediately spotted a red walker used to train kids to skate and pointed to it. I looked at the guy behind the counter and explained that Max wouldn't be able to balance on skates. "He can just walk across the ice with the walker," Ice Man said, matter-of-factly. I asked if that was safe. He told me Max would be OK if he shuffled his feet instead of lifting them. Me, too, because I was going to be walking beside him. I'm not coordinated enough to skate and manage Max, although I probably could chew gum and skate if I tried.

I showed Max how to shuffle. I helped him walk down the stairs to the ice. I stepped on first, situated the walker, then guided him to it. Max had a helmet on, but I was scared he'd fall and hurt himself.


Max grabbed the walker and started shuffling, like he'd been doing it his entire life. He kept going for a good hour and did not fall once, righting himself the few times he slipped. He was downright gleeful. Which makes sense because he loves to push things that move, like carts and strollers.


When we were done, Max wanted to take the walker home. I promised him we'd visit a rink near us. I've never seen them before but I'm betting I can either find a place that has them or buy one.

And then Max is going to be a champion and I am going to be his official coach! Look for it: ice shuffling, a new Winter Olympics event!
Ellen Seidman at 6:42 AM