Max is talking and thinking in sentences: holy progress! 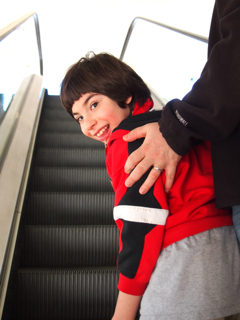 I love words, always have. As a kid, I made up crossword puzzles and borrowed about ten books a week from the library. In college, I wrote for the newspaper and actually enjoyed writing papers (taking tests, not so much). In my adult life, I've made a living off working with words as a magazine editor and have found bliss in blogging.

You might think that Max's struggles with words would get to me, but they don't. I am grateful for the iPad and speech app, happy that he can articulate some words, and thrilled that lately he's been talking more and more. It's hard to understand just what he's saying sometimes, but he is trying so hard. His speech therapists have noticed; the one at school emailed to say she's hearing him talk a lot, combining different sounds. "His approximations have increased and improved," she wrote, a seriously beautiful sentence.

At bath time, Max likes to have chats with himself after I've washed him, shower curtain closed. I perch on the toilet seat and listen to him animatedly babbling away, his pitch rising and falling. It's all good practice, a way to play with sound and speech. The babbling was something I ached to hear when he was a toddler and now that he is doing it, I am in awe.

I get particularly excited when Max does something new with words, which is what happened last night. We were hanging out in his bed, as Sabrina read in her room and listened to a Katy Perry CD because she aspires to be a teenager. Max was telling me he wanted me to buy him a Lightning McQueen bed, and I've been deflecting him on that because he has a perfectly good bed and I've been trying to contain the Cars 2 obsession (mostly unsuccessfully).

Then it dawned on me: Max was pointing to his (Lightning McQueen) wallet and telling me I should use the money in it to buy him a Lightning McQueen bed, and then surprise him with it.

I squealed, I was so excited. This was a complex sentence and thought, too: He understood the concept of money, and he knew he wanted a surprise. And he was up for spending his own money, not mine! What a thoughtful kid!

As is often the case when Max does something awesome, I immediately covered him with kisses. It will be all kinds of embarrassing when I do that and he is, like, 45 years old. But he's only 10 and he's making true progress in one of the areas he's very challenged in. And I am loving it.
Ellen Seidman at 6:42 AM