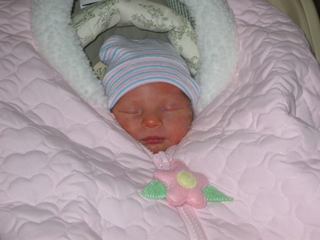 I don't think I've ever shared Sabrina's birth story. Here it is, in honor of her eighth birthday. There were minor bumps, but mostly it all seemed miraculous.

For my second pregnancy, I went to a high-risk practice. Dave and I weren't taking any chances; doctors still weren't sure why Max had a stroke at birth. They had discovered that Ma and I had two mutations that made me more prone to clotting—prothrombin 20210A and MTHFR—but having those alone do not cause stroke, there has to be some sort of trigger, like lack of oxygen.

My doctor put me on blood thinner, heparin, as a precaution and I had to give myself a daily shot. I usually injected my hip but I wasn't very good at it because I'd end up with black and blue marks everywhere that literally made the doctor laugh. I would not make a good junkie.

We knew we were having a girl; we'd decided we were going to do everything different than we'd done with Max. Superstitious, we were. Actually, there was a little confusion about whether she was a she. At my first sonogram, I was told we were having a boy. Dave was thrilled. Then I went for another sonogram (one perk, or perhaps the only one, of being high risk is you get lots of sonograms.). "I'm psyched to have another boy—at least I have all the clothes!" I joked to the technician. A minute later she said, "I wouldn't be so sure you're having a boy."

Technician: "You're having a girl!"

Technician: "I don't know what they saw the last time, but it's definitely a girl!"

I called Dave right away.

And a girl, it was. As with Max, I had a nice pregnancy—no nausea, plenty of energy. Friends asked if I was nervous. No, I wasn't. I felt I was in good hands with the doctors. I knew what had happened to Max wasn't that common. I also just wouldn't let my mind go there. Dave was OK—he's generally pretty laid back—but he'd get a little commando about certain things. We both love sushi and he refused to take me to any sushi restaurant, even if I just had veggie stuff. "What if the knife touched fish?" he'd say. He didn't want me to buy baby clothes ahead of time. Sometimes, he'd put his head on my belly and just listen, as if he were checking to make sure she was OK.

Max and Sabrina are 25 months apart. Max was progressing slowly but surely throughout my pregnancy, moving from commando crawling to zooming around on all fours (he started walking independently at three). As my belly grew, so did Max's understanding. He got that there was a baby in there. He liked to pat it and watch it ripple.

Choosing names wasn't hard. We decided to name the baby after my beloved Uncle Sidney. Dave was thinking Sophie, but then I pointed out that three kids in our neighborhood were already named Sophie. We both loved her middle name, Willa, in honor of Dave's grandfather William. For a while, we considered making Willa her first name.

I was having a planned C-section at week 40. The morning of the scheduled operation, it was snowy outside. As with Max, it had been a super-snowy winter, the kind we don't really have anymore. Max and our babysitter waved goodbye as I waddled to the car. I was excited, and just a little nervous.

We hit traffic en route to the hospital and missed our C-section appointment.

Missing your C-section time isn't something I'd recommend, because what happens is that all the emergency C-sections go ahead of you. That makes sense, but I happened to be there on a day with a LOT of emergency C-sections. The hours crept by. We'd arrived around 10 a.m.. By 4:00, I was freaking out. The anxiety I hadn't had during my pregnancy hit, hard. I kept having flashbacks to Max's birth, when everything had seemed OK only we later found out it so wasn't.

"I am leaving if they don't take me in soon!" I announced to Dave, which made no sense whatsoever. (Where was I going to go?!) He wisely counseled me to stay. The only thing that calmed me down was rambling the hallway with my IV pole. I threatened to leave a couple more times after that. Poor Dave.

I finally went into the delivery room at around 10:30 p.m. There was a big team there, including two doctors from the practice. They knew Max's history, and they weren't taking any chances.

During Max's C-section, I started shuddering because I felt cold, but that was it as far as discomfort.
This time around, though, I felt a lot of prodding that made me nauseous. "STOP!" I kept telling the doctors (yes, I was quite the charming patient). That's when they knocked me out.

When I woke up Dave was holding Sabrina, 7.6 pounds of pink perfection. She had the most wise-looking little face. "Look at how long her fingernails are!" Dave marveled, and they were.

I was in the hospital for four days. Dave brought Max to visit (my mother and sister were watching him). He sat in bed with me and stared at Sabrina; I think he thought she was a toy. Max gave me a ton of kisses, to make sure I remembered I was still his mom.

On my second night in the hospital, I thought Sabrina was breathing too rapidly. I paged a nurse. She came in, looked at Sabrina, said she was fine and left. I asked to speak with the head nurse. Tearfully, I told her what had happened with Max, and that they should not assume anything was OK. After that, the doctor on call came to check out Sabrina. He said she was fine, and explained that it was normal for infants to breathe irregularly at times.

I literally wasn't convinced Sabrina was fine until we walked out of the hospital with her; I needed to get past those first few post-birth days, the time when we had realized Max had a stroke.

When the day came to leave, I couldn't check out until the doctor had looked at my C-section stitches. Bad news; the wound wasn't closing up. An intern had removed the stitches too early, and a visiting nurse would have to come to the house for the next few weeks to clean and re-pack the wound. A minor inconvenience, and a small price to pay for having Sabrina. I wasn't fazed. A little grossed out, yeah.

Dave picked up an adorable little pink car seat sack for Sabrina's homecoming. I remember zipping her into it and not quite believing I was able to leave the hospital with her just like that. A staffer wheeled me to the lobby, Sabrina in my arms. Dave was out front, waiting in the car. And then, like any other parents, we clicked in the car seat and drove away.

We had a beautiful new baby, a healthy baby. Eight years later, I still don't take that for granted. 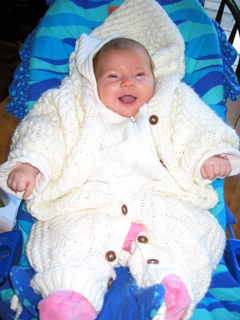