A boy with cerebral palsy is a sports star of the year—and his brother, too 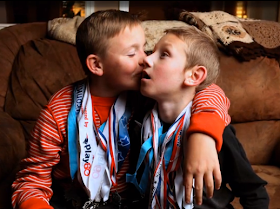 Sports Illustrated Kids has declared not one but two kids to be SportsKid of The Year, featuring them on their December issue. Actually, they're brothers. Actually, one of them has hypertonic cerebral palsy and can't walk. Actually, they enter triathlons together and one brother tows the other on a bike, pulls him in a raft and pushes him in a trailer.

You may already know of Cayden Long, 7, and Conner Long, 9, of White House, Tennessee, since the two have been making headlines since they started participating in triathlons a year and a half ago. They go by the name Team Long Brothers, and they've been traveling the East Coast to compete in races.

I love that Cayden gets to participate in triathlons, and I am seriously inspired by Conner's extreme devotion and ingenuity. I hope that kids who see this understand that there are all sorts of ways to include kids with disabilities in activities, and that sometimes you just have to think outside the...bike.

I only recently heard about the SportsKids honor. I shared this video on Facebook, and wanted to make sure all of you here saw it, too. Enjoy. Pass the tissues.