• I hope the families of the children and adults who died in Newtown, Connecticut are finding comfort in the fact that the thoughts of people around the world continue to be with them.
• I can't stop picturing those children's faces, particularly this 7-year-old, Josephine Gay, who had special needs and loved purple. Children released purple balloons to the sky in her memory. "She could not speak, yet she touched the lives of so many around her," said her parents.
• It's been heartening to hear about efforts in the wake of the shootings, like the young woman at Brandeis University who created Project 27, encouraging people to do 27 acts of kindness—one for each victim.
• Hope people won't forget about the victims of Sandy.
• This was the saddest fall I can ever recall. Just like children have magical thinking, I've found myself wishing it were all a bad dream.
• Need to spend more time doing stuff that's meaningful in new year like projects with kids; hanging out with my mom, sister and other family; and talking with Dave at night instead of sitting on couch typing away. (Er, like I'm doing now.) (Although he's conked out and snoring.)
• Need to spend less time doing Sisyphean house stuff like organizing a bazillion loose toy and game pieces. As Sabrina would say, what-ever. When I am 92 years old, will I give a crap that I managed to keep every single Lego piece together? Exactly.

• I'm pretty sure I spent a disproportionate amount of time in 2012 watching HGTV.
• I'm also pretty sure I spent a disproportionate amount of time in 2012 not working out. Although my wrists are spectacularly svelte.
• How is it possible I still haven't gotten around to watching that Gangnam Style video?
• Although I do get the allure of Channing Tatum (purely on a philosophical level, Dave) even though I sometimes accidentally refer to him as Tatum Channing.
• Wonder what sort of awesome things Max and Sabrina will accomplish in 2013.
• If Sabrina doesn't quit asking me to buy her stuff off Amazon.com, I am asking Jeff Bezos to adopt her.
• Is this the year I'll finally give up my paper planner? Hmmm. Wonder if Tatum Channing has one.
• Proud that I managed to remember all of my passwords to various accounts, even though they do not involve the name Channing Tatum.
• "Another year older, and what have you done?" Well, on any given day I do approximately 1,753 things ranging from "schedule appointment with physiatrist because Max's right foot is tightening up" to "wipe child's butt." I'm surviving a basement renovation (Friendly Yellow is looking good). I'm raising two wonderful kids (materialism aside). And, miraculously, I'm not even getting older!
• I've been writing this blog for more than four years now, and I love it as much as ever. 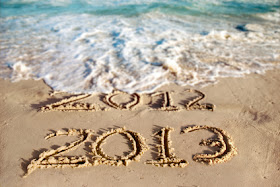 Image: istock/eduleite
Ellen Seidman at 6:50 AM