Raising kids with special needs: What's on your blessings list? 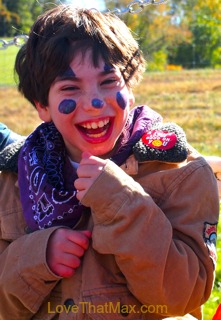 "I'm too blessed to be stressed," said the cashier.

I was in a store the other week buying sheets. Purchasing bedding is one of my favorite forms of therapy—it's relatively inexpensive, it won't make me fat and there is something very comforting about new sheets. In recent weeks, I've been on one of those "What is my life all about?" streaks. You know the kind.

In the aftermath of Hurricane Sandy, I definitely feel blessed, and lucky that our family and friends are OK. I think "Too blessed to be stressed" has particular meaning when you're raising a kid with special needs. Some days, you get wiped out by everything you're juggling. Some days, you get down. Some days, the mere act of washing your face feels like a luxury. But when you force yourself to consider all the good stuff about your child (you know, actually take time to think), you get a whole new perspective.

• His smarts
• His cuteness
• That he walks, despite that doctors told us he might never walk
• His evolving speech and desire to communicate
• The good doctors we've found for him
• The excellent school he's in
• The many amazing and supremely dedicated therapists he's had over the years
• His smile and happy disposition; Max is sunny 365 days a year. Well, mostly.
• That he doesn't like SpongeBob SquarePants
• How much better control he has over using his hands; there were times when we weren't sure he'd ever be able to point, let alone pick up a spoon.
• His determination
• The iPad, his speech app and the world they've opened up for him
• His curiosity to explore
• His eagerness to learn
• That he doesn't notice it when kids stare (yes, I consider this a blessing)
• His vast enjoyment of life's little pleasures, whether he's pushing around a toy car or downing mac 'n cheese: that squeal of joy lifts me like nothing else.

• His vast enjoyment of life's big pleasures, like The Disney Cruise
• His noise-blocking headphones (thank you, sensory gods)!
• His Good Hair
• The programs that have welcomed him, like The Friendship Circle
• That he willingly and happily sits through his therapies
• His deep appreciation of chocolate ice-cream
• His snugglebunny tendencies

I'll be referring to this list going forward when I'm having one of Those Days.

This is one of a series of posts sponsored by CVS Caremark All Kids Can, a commitment to helping children of all abilities be the best they can be. Like them on Facebook!
Ellen Seidman at 7:00 AM