Helping kids with special needs understand the destruction of Sandy 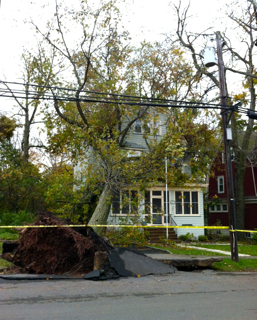 It's bedtime, and Max is snuggled beneath his comforter, pointing to the lights in his room and smiling. I know what he's telling me, without a word.

"The lights went off but they came back on, right?" I say.

"YESSS!!!!" says Max. He was downright giddy when he saw the cavalcade of electric workers come to our neighborhood to restore power last Friday. We stood and watched them fix the transformer that had gone out. I asked him to say "Thank you!" to the guy in charge, and he did.

I haven't been sure how much the storm has affected him. I know he was aware of what it sounded like, as you may have heard in last week's video. Like many kids, Max has been more than happy not to have school and hang out with me and Dave. But he's missed lessons and therapies for six days, not a good thing. His speech therapist made her way over to our house for one session, driving through a miles-long obstacle course of downed trees and power lines. That's dedication. As I write this, sixty percent of my neighborhood remains out of power; we're one of the lucky ones.

One of the most important things for helping kids after a crisis is to reinstate the structure of their live, "and build new ones where it is not," notes a clinical psychologist on Lisa Belkin's blog at Huff Post Parents. It's also key for parents to reassure kids that the world is still safe. I've told both kids repeatedly that our home is strong, the trees stayed strong, and that we are OK. I think it's important, too, to encourage empathy and our responsibility to help people however we can.

When I asked Max what he thought might help people affected by Sandy, he said "chocolate ice-cream." Hmmm. Later, I'm going to bring him to a local drop-off that's collecting supplies for people in need so we can donate diapers and formula. I showed the kids the fundraiser for Kim, a mom of a kid with Down syndrome who desperately needs a car to drive her son to therapies, and talked about my hopes of spending a couple of days helping with rebuilding in New Jersey. We've made donations online together, hunched over my computer.

Max takes his hand and swoops it down. "Eeeee," he says. Tree.

"I know, some trees fell down," I say. We took a joy ride to the supermarket this weekend ("joy ride" because Dave waited three hours in line for gas and driving felt downright luxurious) and the number of trees that had fallen was mind-boggling. We'd collectively gasp when we came upon the bigger ones, lying across a road or on someone's home.

Max wants the trees that have fallen to be lifted back up. "We still have a lot of trees," I say. "And then we can plant some new trees."

He ponders that, seems satisfied and turns over to go to sleep, snug and safe in his comforter.
Ellen Seidman at 10:08 AM