Dear Nike: How about helping more kids and adults with disabilities? 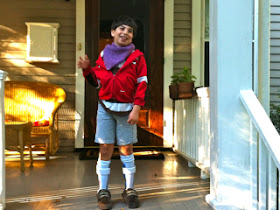 I've been following the story of Matthew Walzer with enthusiasm. When I first read the letter the Florida high-school junior wrote to you, mentioning that he has cerebral palsy and that he has trouble tying his shoes, I knew just what he meant. Like Matthew, my son, Max, also has CP and cannot tie laces due to challenges with fine-motor skills. Like Matthew, doctors told us Max might never walk and, wow, does he walk. And if he is headed down the block toward the ice-cream store, he runs.

Max has orthotically-correct shoes with Velcro that fit over his foot braces; as you may notice, they're big and clunky and not exactly the kind of style that inspire shoe envy. We haven't been able to find a cool pair that fit over his braces, or that he could close on his own. (You may also notice the Nike sweat jacket, it's his sister's and they regularly argue over who gets to wear it; Max is not the least bit sibling-rivalry impaired.)

I loved Matthew's suggestion: that Nike design and produce basketball and running shoes with good support and a closure system that could be used by everyone. It was awesome when the letter spread through social media and reached your chief exec, Mark Parker. It was also awesome that Nike responded, creating a specially-engineered shoe for Matthew, and that you delivered two more pairs before Thanksgiving.

This is fantastic...if you are Matthew Walzer. Of course, it's a heartwarming story for all to hear; it's nice to know that companies care. Still, here's the thing: We parents of kids with special needs would like to think it's more than a token act of goodness. There are thousands more Matthews with cerebral palsy who sure would love an adaptive pair of Nike sneakers, just as there are many parents who'd like their kids to be able to wear the sneakers they grew up in and love.

Unlike Matthew, Max isn't yet able to write letters to companies. So here I am, his mom, speaking up for him in my usual quest to make him happy, help him fit in with his peers, empower him and generally enable him to kick butt.

Nike has a reputation for social good. Nike also has the smarts and technology to manufacture a line of sneakers for kids and adults with disabilities. How awesome would it be for a major apparel company to do that? I can't think of any other mass ones that make products for people with disabilities. You could, once again, show the world the way to innovate. And you are cool enough not to name the sneakers ortho-anything!

Max would rock those sneakers on his Little League Challenger Division team, for kids with special needs. He'd rock them when he rides his bicycle, plays adaptive soccer or cruises the mall for chicks. (Oh, OK, he's not yet doing that.)

So I'll borrow the phrase you made famous: