Bad Mom confession: I was glad to destroy a toy 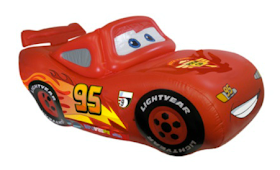 Shocking news: I denied Max a Lightning McQueen car. Before you reach for your phones to report me to the authorities, allow me to explain.

I had an exciting day planned for Sunday, including scrubbing down our deck, clearing the mass of soggy leaves out of our yard that Sandy and the Nor'easter bestowed and—most thrilling of all—trimming back the dead hydrangeas. So Dave took the kids out, which meant that they were for sure going to make a pit stop at Toys 'R Us (see: Mushball Daddy). 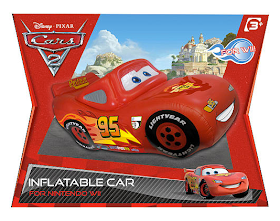 Max's obsession with Cars 2 is showing no signs of letting up. It's the theme of this year's birthday party, and for weeks he's been reminding me that I need to purchase Cars 2 cups, plates, napkins and a tablecloth. Actually, he reminds me a couple of times an hour. His new favorite video is this Party City one about a mom who throws her son a Cars 2 party with about two million dollars worth of Cars 2 merchandise purchased from, you guessed it, Party City!

Dave started inflating the car in the living room and I went off to take my shower. When I came back down, Max was seated in the car. Two thoughts went through my head:

1) Wow, that car's really making him happy.
2) Damn, that is one seriously big, ugly car sitting in the middle of our living room.

Our living room is one of the only places in the house that hasn't got a bazillion toys lying around it. And now, it had been consumed by Plastic Lightning McQueen. There wasn't any other place to put it; we're about to renovate the basement and everything's been moved out. I'm sure Max would have gladly gotten rid of his bed and slept in Plastic Lightning McQueen, but I wasn't about to suggest it.

I didn't like the fact that Max couldn't get into the car by himself—it was too bulky for him to lift a leg and climb in. And did I mention it took up a huge chunk of our living room? I was not pleased. Max, however, was. Very. He hung in the car for hours.

We're due for new drapes in the living room, and I could just hear myself talking to the lady at Calico Corners:

Lady: "How would you describe the decor of your living room?"

Me: "Half Plastic Lightning McQueen, half Pottery Barn."

And then, while I was in the kitchen getting a drink, I heard Sabrina say "Uh-oh!"

Could it be? I looked into the living room. Plastic Lightning McQueen was rapidly deflating.

"What happened?" I asked, trying not to sound ecstatic.

Sabrina looked worried. "I jumped on it and it made a 'pop!' sound," she said.

Max jutted out his bottom lip, the thing he does right before he cries. "Don't cry, sweetie, we'll get you a new chair," I said.

It was getting late, and the store would be closing soon. "No, tomorrow," I said. He looked a little dubious.

Meanwhile, Sabrina burst into tears. "It's OK!" I said, hugging her. "You didn't do it on purpose. We'll get a new one."

What I really wanted to say was "WOO HOO!" Sabrina's habit of bouncing on things all over the house had actually come in handy.

Max kept reminding us for the rest of the night that we'd be getting him a new Cars 2 chair.

So then, I was cruising around the web last night. And I found this: 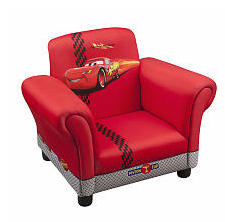 A Cars 2 armchair! I mean, how awesome (relatively) is it? It's downright elegant compared to Plastic Lightning McQueen. It's upholstered. It's the kind of chair you might someday see auctioned off at Christie's, so fine is it!

Dave's going to pick it up today. I'm hoping Max is as thrilled with it as I am. Worst comes to worst, I know how we'll be decorating the basement playroom once it's done: Plastic Lightning McQueen.

Update: Dave got home with the armchair after Max was asleep. Max saw it this morning and had a fit because as it turns out, it's not a Cars 2 armchair. Also, it's not BIG. So back to Plastic Lightning McQueen it is. Unless Sabrina breaks it again. One can only pray.
Ellen Seidman at 6:40 AM