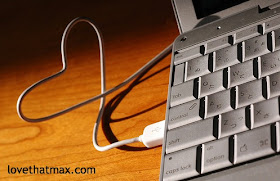 I've been writing this blog for four years now. It's been a joy, an inspiration, a learning experience and an effort that I've loved. Every single day, I am grateful for the community here, glad to have the opportunity to share what I've learned from raising Max, and continuously revved to spread the word about why our kids rock.

Sometimes, you get comments or emails that make you painfully aware of what an uphill battle it is to get the world to respect kids with special needs, as typically happens when I write about the word "retard." Sometimes, you get comments or emails that let you know that, yes, you have made a difference. Below is one of those emails. I'm sharing it, with this teacher's permission, to show that you never know who will find your writing—and you never know who you might influence.

There's a Talmudic saying "Whoever saves a single life, it is as if he saved an entire world." That's similar to how I feel about writing here: If I have helped just one kid or parent, then I have done a world of good. If I have gotten one person to see the awesome-ness of children like Max (and quit pitying them!), then I have done a world of good. And if I've helped a whole bunch of people give people with disability more respect? Well, wow.

I hope blogging brings you that same satisfaction. I hope your words change hearts and minds and perceptions and stigmas, for the sake of our beautiful, kick-butt kids.

I just wanted to let you know...

I'm a high school history teacher.  I teach a senior elective called Genocide in the Modern World.  I always start the year with the Ladder of Prejudice, and this year, as my class was turned into a full year course, I was able to spend more time on things that were related to genocide but not exactly genocide.  I spent some time on hate groups in America (KKK, Neo-Conservative, Racist Music, etc).  This gets interesting for you soon, promise.

This week my students presented their projects on hate groups.  The last two groups went today, and then I started a discussion on how to react when students hear things.

Two of my big NO words are "gay" and "retarded" and I try to explain and emphasize to students why those words are so terrible to say, and why they should stop saying those words.

Today, after the last of the groups presented, I asked the class how they stop something.  I drew the Ladder of Prejudice on the board (speech, avoidance, discrimination, physical attack, extermination).  I then told the students that there's a walkway to the ladder of prejudice and it contained two steps - ignorance and fear.

I focused on ignorance.

I said that in order to prevent things like the hate groups they just presented about from cropping up everywhere, ignorance needed to be educated.

Someone asked what would be the point, if someone said something and they spoke up, it's just one person.

And it was perfect, because just yesterday I found your blog post from March 2, 2011, "If you ask people not to say the word 'retard.'"

I pulled it up on my SMARTboard and zoomed in.  I read the whole thing to them.  I had copies of it that I printed off (I removed the picture of your son) and I passed them out to students.

They were impressed with your dedication.

Some said they were going to do that tonight too. (set up alerts and comment on twitter)

I saw the tweets you posted in your blog post.  I read them all.  We saw how you were discouraged and frustrated by some responses you received.

So I wanted to let you know that your post, your campaign, was just introduced to a group of high school seniors.  And they seemed inspired by it.

I hope you don't mind that I printed and passed out your post.  I was touched.