A world more welcoming to people with disabilities: what it's going to take 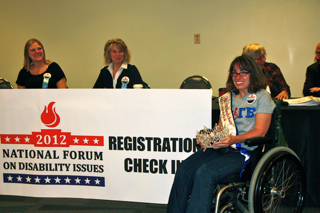 Last Friday was a major event: the National Forum on Disability Issues, to present the disability positions of the 2012 presidential candidates. While Obama and Romney didn't attend, they sent representatives: Ted Kennedy, Jr. and Rep. Cathy McMorris Rodgers. Max and I had a representative there, too: Mariah Rose Kilbourne, Ms. Wheelchair America 2013. Actually, she was there for all of us and our kids. 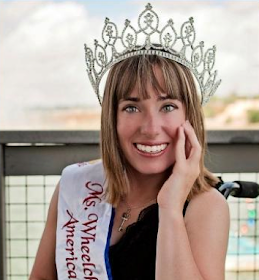 Mariah, 24, works at The Seguin Economic Development Corporation in Texas, commuting via paratransit bus service. She's a published writer and advocate who's into photography, public speaking and fundraising. We've connected online in the last few years, and she is truly an amazing person inside and out. Here's what she had to say about the historic day.

As a community of Americans with disabilities, our voices need to be heard when deciding the policies that affect everyone in this nation. We must exercise our full participation. If we don’t step up to that next level of evolution we will always be subject to the ignorance that results in low expectations masked as compassion that robs us of our true viable future as fully participating members in this experience called America. It will be a better America because we are fully participating in it.”—Anil Lewis, Director of Strategic Communications, National Federation of the Blind.

In 2012, those in the disability community still struggle for true equality, freedom, and independence. We are still fighting to break down longstanding architectural and attitudinal barriers to pursue the American dream alongside our able-bodied peers. This is an important year. This November, during the Presidential election our voices will be heard.

On September 28, 2012 those disabilities, their family, and friends had the historic opportunity to take part in the National Forum on Disability Issues. This nonpartisan event focused on the disability positions of the 2012 Presidential candidates. Edward M. “Ted” Kennedy, Jr. and Representative Cathy McMorris Rodgers (R-WA) spoke on behalf of their respective parties to present their campaign’s positions on matters relating to Americans with disabilities.

500 participants attended the event, held live in Columbus, Ohio, while thousands more watched a web stream. I was able to attend the event in person. From the moment I rolled in the doors, I felt a sense of empowerment—a sense of unity and community. Several disability leaders, activists, and organizations were present to lend a strong voice. It is vital to educate yourself and others on the issues that are being debated and how they affect you, your family, and your community to be an empowered voice this November. 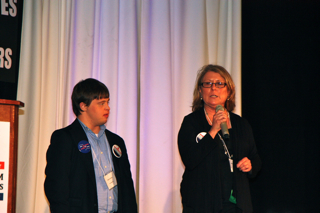 While much progress has been made towards equality, respect and dignity for people with disabilities, we still have a long way to go. Many of the stigmas and discriminatory attitudes towards people with disabilities remain. While their proposed policies in the areas of insurance, healthcare, education, employment and housing differ, it was very encouraging to hear that both candidates encourage bi-partisan support to continue the efforts towards building a fully inclusive America.

For example, 67 percent of working age people with disabilities are unemployed. Moreover, more than one million people with disabilities have lost their jobs in recent years. These statistics, while staggering, were not surprising to me. As a 24 year old with a disability, one of the hardest aspects is finding employers that will see talents, gifts and abilities, rather than physical challenges. It is an ongoing challenge to get employers to see the person first and not the wheelchair. Several of my friends with disabilities have faced similar challenges to find meaningful employment. 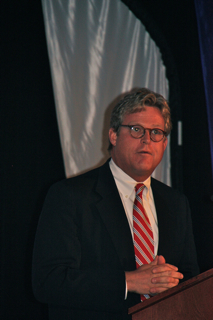 Housing and self-care options were also important topics for me as a young adult with a disability at the Forum. In my experience, I was able to live on my own during college. I stayed in the dorms and experienced a great deal of freedom. Because the dorms were ADA accessible, I was able to live independently and fit in just like all my able-bodied peers. In my transition after college, I found it very difficult to find accessible housing options. Due to lack of options, I had to move back home with my parents. I had to give up a lot of the independence that I worked very hard to gain. This setback, due to lack of resources, was very disappointing. Some of my mid-20s aged friends, have even had to move into nursing homes because that is the only accessible housing option available. This fosters a sense of exclusion and isolation from peers during a time when socialization and independence is crucial. 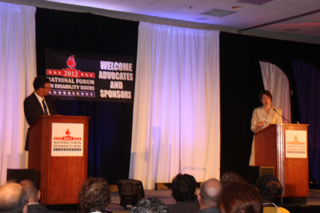 I am excited to hear that both candidates are working towards increased accessible housing and self-care options. Both have recognized the financial benefits of affordable, accessible, integrated housing rather than traditional institutionalized care. So far, more than 20,000 people have transitioned from nursing facilities to home-based care. Improved access to housing, community support and independent living arrangements is vital to the obtainment of equality, independence and American dream for all. With continued support of opportunities like the Forum, to become educated and empowered on the issues at hand, I have no doubt that the dream will one day become a reality. 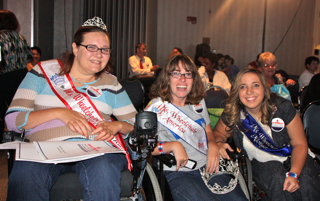