What cerebral palsy is and isn't: World Cerebral Palsy Day 2012 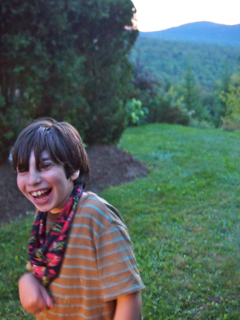 Today is World Cerebral Palsy Day. The organizers asked people to submit a brief video or message with an idea for bettering the world for people with CP. One of my most desperate wishes for Max is for people to quit pitying him or being wary of him and just see him as a kid, period. Given that there's no Men In Black type wand I can wave over people's heads, I just have my words. So my contribution today is to share some of what I've learned about cerebral palsy over the years. I hope it helps people better understand what CP is and not feel bad for Max and other kids with cerebral palsy who kick butt.

Cerebral palsy isn't a disease. It's a disorder. And it sure isn't catchy, although from the way people sometimes stare at my son, you'd think it is. People sometimes fear what's different, it's true—but Max is a kid, not an alien. He is a rather awesome kid. I'm often asked what, exactly, adults or kids should say to a kid with special needs. Here's what you can say: "Hi."

Cerebral palsy isn't a muscle or nerve problem. It's caused by damage to parts of the brain that control muscle movement and coordination—"cerebral" means having to do with the brain, "palsy" means weakness (there's a good history of CP here). Max's brain damage occurred at his birth, when he had a stroke. Until I had Max, I wasn't aware that your brain controls every muscle in your body (apologies, high school anatomy teacher). But it does, even the ones in your tongue, which is why Max has issues with talking, eating and drinking, along with challenges using his hands, arms and legs. Thing is, Max hasn't gotten the memo that he has physical "issues"—this is the body he was born with, and he uses it the best he can, same as any of us.

Cerebral palsy isn't necessarily a cognitive issue. Some children with CP have intellectual disability; some do not. CP affects everyone in different ways, depending on which part of the brain is damaged. Max has some cognitive impairment. So what if he isn't at the intellectual "level" of other 9-year-olds; he is plenty bright, plenty aware, plenty wily (he is a master at tormenting his little sister). Max learns in his own way, on his own timeline. This year, he started to read, and I couldn't have been more proud. Max does things when he is ready; there is no race to a finish line.

Cerebral palsy isn't progressive. Although the brain damage doesn't get worse, issues with muscles can improve or worsen over time or remain the same. Last year tendons in Max's right foot tightened up and made it turn inward, and he needed a series of casts to help straighten it. It gave us a scare but the casts did the job, and life went on. We're lucky to be living in a time when non-surgical options like this exist, although if Max does someday need surgery to ease tightness (aka spasticity), we'll have that option, too.

Cerebral palsy isn't curable. Not yet, though there's been recent promising research about interventions at birth that could prevent it. But CP is manageable; physical therapy, occupational therapy, speech therapy, and even music therapy have helped Max better function, and continue to maximize his potential. The CP has had no affect on his determination, which is not the least bit impaired. If more people had determination like Max's, a whole lot more would get done in this world.


...AND 4 THINGS CEREBRAL PALSY IS

Cerebral palsy is the most common childhood motor disorder. About 764,000 kids and adults in the U.S. have CP, according to United Cerebral Palsy, and 8000 babies and infants are diagnosed with it each year. About 17,000,000 people worldwide have CP, according to Reaching for the Stars. In case you're wondering, it is less common than autism—an estimated 1 in 268 kids in the U.S. has cerebral palsy, while 1 in 88 kids has an autism.

Cerebral palsy is a disorder that can be detected early on. While signs of CP vary, there are main ones in babies and young children. With those under 6 months old, a lack of head control, stiffness or floppiness, overextending the back and crossed legs are the major signs, per the Centers for Disease Control and Prevention (CDC). Max had stiffness as a baby and still does; it can make movements challenging at times, but it does not hurt him. Signs in babies older than six months including not rolling over, bringing hands together or to the mouth, and reaching with just one hand while keeping the other fisted. In babies older than 10 months old, signs include crawling in a lopsided way and not being able to crawl on all fours. The earlier the diagnosis, the sooner a child can get Early Intervention services.

Cerebral palsy is what my son has, but it does not have him. Max may have cerebral palsy, but he is not defined by it. He doesn't sit around feeling sorry for himself. He just knows to enjoy the life God gave him and that we, as his parents, have built for him. Max's love for his family, learning, riding his bike, watching movies, and downing copious amounts of chocolate ice-cream is as strong as any child's. My love for him is as strong a love as any mother feels for any child. 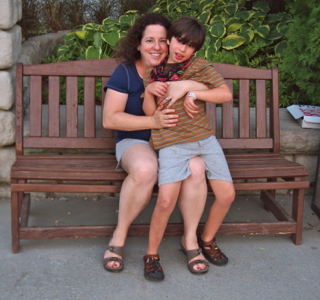