A special needs Hooters? Bring it 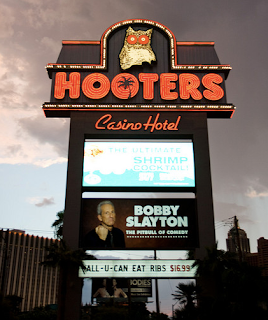 The press release popped up in an email recently, while I was riding on a train in a semi-trance induced by the lull of movement and having actual time to think.

Wow, I thought. A Hooters for special needs? That's being funded by a state?! Eeep. Ick. Had business in this country reached such lows that the government was stepping in to help establish a special needs Hooters?

I pondered what that even meant.

Maybe they were going to hire busty waitresses in wheelchairs? Busty bartenders with Down syndrome? Busty cashiers with autism?

Maybe they were going to adapt beer bottles and mugs so that guys with cerebral palsy would be better able to hold them?

Maybe they were going to make specially-shaped chicken wings so they could be more easily grasped, too?

Maybe they were going to bring in big-boobed singers with disabilities?

Maybe they were going to create a Hooters app for speech-impaired people? You know, one that could utter phrases like "Hey, baby, I'll have a pitcher!" or "Nice wings ya got there!" or whatever customers at Hooters typically say?

As my imagination whirred, I decided that if this meant guys with disabilities could better enjoy Hooters, then I needed to reconsider my initial "ick" stance.

Now, it's not that I want Max to put "Become a regular at Hooters" on his life bucket list. Actually, I'd prefer he avoid that place like the plague. I'm not gunning for him to someday sit around leering at women and objectifying them.

But when he grows up, I want him to be able to go there—if he wants to do that.

I want the choice to be his.

I want the entire world open to him, with all the freedom accessibility and inclusion bring.

Even Hooters, so be it.

I took another look at the news release. "Advocating state funding for Hoosiers with special needs," it said. It was from the Indiana Daily Student.

So, no Hooters for special needs in the works right now. Never thought I'd fantasize about that but, hey, it wouldn't be a bad thing.