A night at the museum (in real life) 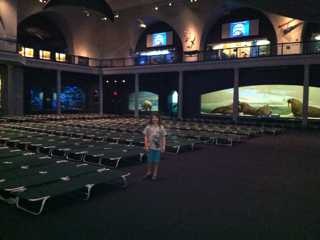 Our family loves sleeping away from home—at relative's places, in motels, in hotels, wherever. Until now, we've never slept in a museum. But we did—legally!—at the A Night at the Museum program at New York City's American Museum of Natural History.

I've been eager to take the kids since a friend first told me about it, and when I got an invite I jumped on the chance. Sabrina was out of her head with excitement. Max was dubious; he worries that events are going to be loud. I told him he could keep his headphones on the entire time, and promised that if he didn't want to stay, we could go to my sister Judy's apartment. But secretly, I had a feeling he'd get into it.

We hauled our stuff in at check-in at 6:00 p.m. on Saturday, including borrowed sleeping bags and Max's beloved pillow with the frayed Cars 2 pillowcase. There were a lot of people lined up; I told a staffer Max had sensory issues and asked if he'd let us in ahead of the crowd, and he did. I knew Max would feel calmer if he could see the room when it was quiet. We were in the Milstein Hall of Ocean Life; some families sleep in the Hall of African Mammals and Hall of Planet Earth, but there's nothing quite like crashing beneath a giant whale, in my expert opinion. 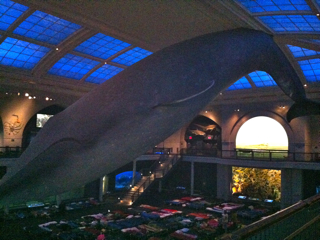 We ended up in a corner spot, tucked away behind the stairs in the back, a diorama of dolphins right above our cots. At first, Max refused to let me put his pillow down, but eventually he got sucked into the videos around the room. 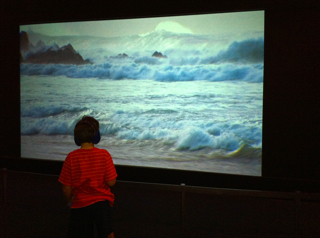 After orientation, jam-packed evening schedule in hand, we headed off to make glow-in-the-dark Angelfish headbands, so we'd fit right into the Creatures of Light exhibit. 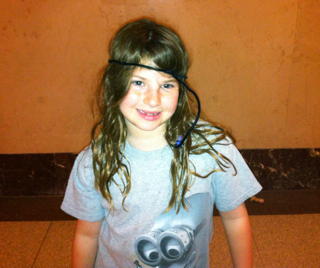 The exhibit was too dark for Max, so he and Dave went wandering while Sabrina and I walked through, learning about insects, sea life and other creatures that glow, blink and glimmer. Fascinating fact: When fireflies light up at night, they're actually flashing patterns as a warning signal to predators that they might not taste so great—and sending signals to attract mates. So much more logical than human mating. 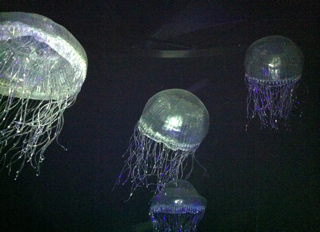 Jellyfish are my all-time favorite sea critters; I used to want one in my room as a kid.

A video about the exhibit

Next, we did a couple of "Open Exploration" activities; Sabrina did some origami paper folding in the Grand Gallery, and made an animal totem pole in the Hall of Northwest Coast Indians. 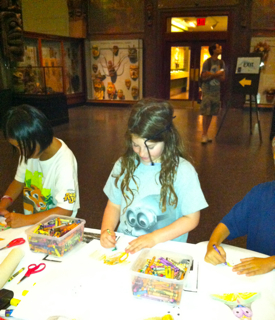 The night we were there, the Hall of Planet Earth, Hall of the Universe and Cosmic Pathway were open for exploration in the Rose Center of Earth and Space. You have no chance of getting lost in the museum, because there are plenty of volunteers floating around. (Though I did think it would be cool if we got lost.) At 8, Sabrina and I met up with Max and Dave for snack time. The kids downed bananas, oranges, granola bars and mostly Oreos. Then they discovered that fascinating, age-old entity known as The Photo Booth.

The night was young, and Max was getting into it; he told me he wanted to sleep in the museum, not Judy's house. Wahoo! We headed over to the Live Raptors show to hang out with a falcon, screech owl and red-tailed hawk and learn about them. 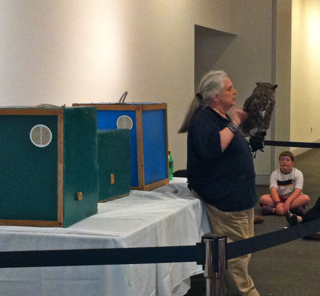 Afterward, Dave and Sabrina went off to the Fossil Exploration, in which they roamed around with flashlights checking out dinosaurs. Meanwhile, Max and I checked out Small Mammals, complete with flying squirrel; Max pointed to their names and asked me to read them out loud. We also spent time in an environment hall, watching films about an expedition to find goblin spiders in Ecuador and one on the over-harvesting of fish in our country. Having the galleries all to ourselves gave Max time to focus, and it was awesome to be exploring alone with him. 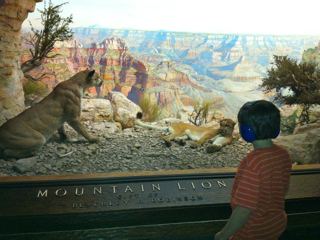 We both loved the hall of North African Mammals, which are creepy-cool at night. 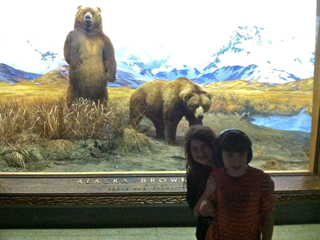 Immature parent alert: If you position your children just so beneath the Alaska Brown Bear diorama, it will look like one is about to eat them.

At 10:15 the crowd headed to the IMAX heater to see Flying Monsters, a documentary about pterosaurs, the first flying vertebrates. Max has never seen a movie in a theater; the darkness scares him. We stood outside as everyone filed in. The doors closed; he peeked through a crack. A minute later, he motioned me inside. We stood in the back and watched the movie for a good fifteen minutes, a breakthrough for him.

By 11, the kids were wiped and couldn't stay up for the bedtime story. We'd worn shirts and shorts there to sleep in, so we just brushed our teeth in the bathroom and crashed on the cots. Everyone nodded off easily, even before official Lights Out time at midnight. I woke up just once later on, when I heard some woman telling Dave "Sir, you're snoring, can you please turn over." Welcome to my nightlife.

In the morning, we had breakfast with the group and then we browsed the museum shop. Max didn't want to leave! He dragged Dave over to a big board that had photos of all parts of the museum, and showed him his favorite spots. 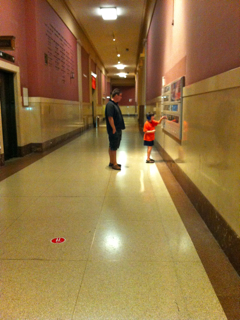 It was an experience all of us will always remember; exploring one of world's best museums in the quiet of the night is magical. For me, there was the added thrill of seeing Max push past his fears—and really enjoy the adventure.
Ellen Seidman at 6:42 AM