The magic powers of chocolate ice-cream 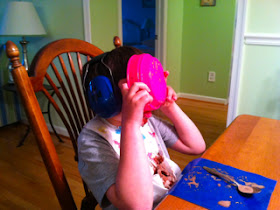 I gave Max a bowl of chocolate ice-cream over the weekend, and he had himself a slurp-fest. I couldn't have been more psyched.

Max has been an independent eater for a good six months now, though I remain amazed by this feat. All those years of spoon-feeding him aren't easily forgotten. Sometimes, he still tries to get Dave to feed him because he is Daddy codependent that way. One raised eyebrow from me and Mushball Dave backs off.

Max uses this cup for drinking, the Infa Trainer. It's easy for him to grasp and the tiny holes at the top mean liquid doesn't come pouring out; you can adjust the flow to slow, medium or fast. It works particularly well with beer, but not so much with tequila shots.

Our speech therapist is working on getting Max to drink out of a straw, not yet in his repertoire of oral-motor abilities. It's one of those small things that blindsided me; I couldn't believe a straw was a challenge. Max has made some progress with boxes of chocolate milk—if you start by squeezing it so the stuff comes up through the straw, he gets the idea and sucks on it a bit. OK, it's not like using a straw is something he'll one day put on his resume, but it'll make it possible for him to down liquids in a can or bottle too wide or heavy for him to hold. Like beer.

So like I was saying, I gave Max a bowl of chocolate ice-cream. Three scoops, because he said "Eeesh!" ["Please!"] so cutely, and I am a sucker for his cuteness and for any words that come out of his mouth. Then I went over to the sink to do some dishes. When I turned around, I saw that he'd picked his bowl up with both hands and was slurping down the remains of his ice-cream, the first time he'd ever grasped a bowl like that.

Ah, the magic powers of chocolate ice-cream. I have to think of other ways to put it to use.
Ellen Seidman at 6:42 AM