I'll stop doing it all when I die 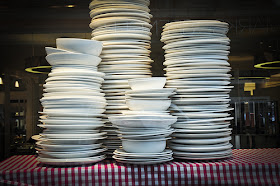 I walked in the door at 11:35 p.m. to find a tornado had ripped through my kitchen. OK, the only actual natural disaster were Dave, Max and Sabrina, who'd been left to their own devices while I was in Utah at the Evo Conference. But you would have thought I had ten kids, and several husbands, from the scene: dishes piled high in the sink, toys scattered everywhere, mysterious sticky substances on the floor, newspapers and paper plates and cups all over the table.

En route home from the airport and exhausted, I'd had an idea of what lay in wait. Just ignore it until the next morning, I told myself.

I decided I'd just open some mail. I picked up one thing off the floor. Then another. Then another. I cleared off the table so that you could actually see table. I decided that I might as well load the dishwasher. I dabbed at some of the sticky spots.

I went to sleep at 1:30. Dave and both kids were in our bed, so I crashed in Max's room, curled up with his Cars 2 comforter.

Non-news flash: I have a problem with not doing stuff. It can never wait for tomorrow, my brain says, because tomorrow there will be 2,379 more things to do. Some days, the only thing I procrastinate is a bathroom break because I don't want to take the time.

At Evo, the digital director of RealSimple.com, Kathleen Harris, shared results of a Women & Time survey the magazine had done of 3,230 women. One out of two women say they don't have enough time (shocking only because every single woman didn't say that). Meanwhile, 60 percent of women said that knowing that all of their chores were done would enhance the quality of their free time a "lot."

I know I'm never going to cross off everything off my to-do list. The sticky spots of my life aren't going away. The best strategy, I think, lies in caring less about getting this stuff done pronto. And inventing a self-cleaning kitchen. And a self-cleaning husband and kids.


Mostly, though, I need to work on caring less.


Photo: Flickr/pj_vanf
Ellen Seidman at 6:45 AM