A kid with cerebral palsy kicked out of a pool for his water wings: WTF? 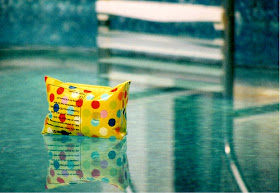 A mom and her son with cerebral palsy had to leave a pool in Pittsburgh because he was wearing water wings: add this incident to a growing file of special needs WTFs. The incident is disturbing on many levels—it ruined a kid's fun, it gave his mom grief, and it once again makes me worry about the blinders people have on when it comes to kids with special needs.

The story, as recounted on wpxi.com: Jen Wymer, her daughter and her son, Max, were at a public pool in North Park on Monday. Both kids had water wings on. When lifeguards told her the wings were against the pool rules, she took them off her daughter but asked to keep them on for Max. As Wymer tells it, "I went up to the lifeguard and said, 'My son has cerebral palsy. He doesn't walk well and has poor balance. Could he keep the floaties on?'" But she was told, says Wymer, "Rules are rules."

When Wymer refused to remove them, the police were called. Wymer took the wings off. After holding Max up in the pool for an hour, she put them back on. When the police returned, according to Wymer, they escorted her out of the pool.

A lot of pools prohibit water wings, fearing they give kids (and parents) a false sense of security. But if a child with cerebral palsy happens to have them on, for extra support, and is being held or closely watched by a parent, can't he just stay for the day?

The Pool Rules and Regulations listed on the Allegheny County website state that life preservers and water-wings are prohibited in the pool. They also state "Exception: specialized flotation devices for disabled patrons only." Water wings picked up at Target or Sports Authority may not count as "specialized flotation devices" but in this case, they were serving as such.

I'm sure the lifeguards at the pool were trying their best to do their jobs. I get that. Safety at the pool is everything. What concerns me is that they couldn't find any way of accommodating this boy. Couldn't they have told the mom, "Just this once, but next time we can't allow it"? It doesn't seem like the pool crowd would have staged a protest—in fact, a woman standing nearby reportedly told the police "She obviously has a disabled child." Assuming the mother wasn't threatening to do them bodily harm with a water wing, did they even have to call the police? Come. On.

Here's one seeming dichotomy of raising a child with special needs:

We want our kids to fit in with other kids and be treated as equals.

We want special treatment for them, too.

The truth, though, is that these go hand in hand. In order for this Max, and my own Max, to enjoy certain activities—like any other kid out there—occasional exceptions have to be made. Parents may have to take a stand.

But hopefully, police won't have to be called.

Update! Max is now allowed to wear his water wings at the pool, wpxi.com reports, after his Mom got a doctor's note for them.