My son with special needs is funnier than you are, Margaret Cho 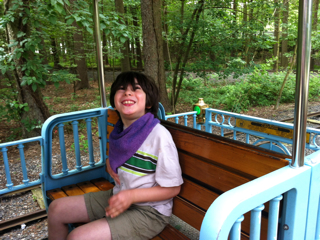 "I don't necessarily want to have a retard," so-called comedian Margaret Cho said last month. She was on Bravo TV's Watch What Happens Live, discussing her new comedy tour, Mother, which is about motherhood and her hopes of achieving it at age 43. "My eggs are jumping ship," she said, as reported on Fox News. "Seriously, they're like 'The last one's out a retard.'" Host Andy Cohen shook his head and said, "You can't say that" as the audience tittered. (Love the commenter on Breitbart who noted, "That's all right. I'm sure the kid feels the same way.")

How not funny is she? I mean, seriously. Even if I didn't have a kid who was cognitively impaired, I know I still wouldn't get what's amusing. I am weary of comedians who use the word "retard" as a crutch in their routines. (Hel-lo, Tracy Morgan and others.) Sure, comedians sling around other slurs, too. But I say that if you make people with special needs a punchline, you have a humor disability.

I'll tell you about funny, Margaret Cho. My son has a more developed sense of humor than you do. He knows how to joke; you rely on a derogatory term for cheap laughs.

Max, as I pour cold milk into his Rice Krispies at breakfast:
"It's HOT!"


Max, when I ask if he wants a medium or big chocolate milkshake:
"Medium and big!" [Cracks up.]

Max, at the barber shop when I jokingly ask what to do with all the hair the guy just cut off him: He points to the barber's nearly-bald head and says "Him!"

Max, listening to Sabrina sing "Call Me Maybe":
"No!"

Jon Stewart, he's not. What I'm saying is, I'm thinking Max could help you write some material, Margaret Cho. For a small fee.

Update: Cho issued an apology. Glad to hear it. Saying she has "very little experience with children and mothers," however, doesn't seem like much of an excuse.
Ellen Seidman at 6:35 AM