The day I returned to my old life 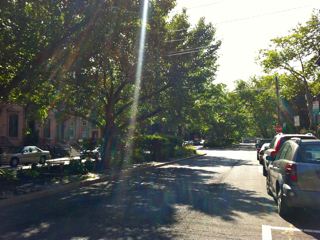 Last Wednesday, I returned to my old life, the one before I had kids. The lightning bolt of sadness that struck came from out of the blue.

What I did was spend a day in Hoboken, NJ, where I lived for 10 years after college. I've been back a couple of times since we moved, but usually with the kids and rarely at leisure. This time I was alone, with an afternoon babysitter and no plans whatsoever.

First I had lunch with my friend Theresa, a rare two-and-a-half hour blabfest. Afterward, I wandered around aimlessly, amazed at how built up the downtown area had become: single homes razed for apartment buildings, a fancy W hotel, a bank transformed into the most majestic Wal-greens ever, an entire new transit line.

But some of my own landmarks remained: The bar where I used to go hear bands play, the sandwich shop where the guy behind the counter started making my turkey-mozarella-roasted-red-pepper sub as soon as I walked in, the salon where I got a manicure on the snowy day before our wedding, the intersection where Dave crashed my Toyota Corolla (he was fine; Toyota, totalled). 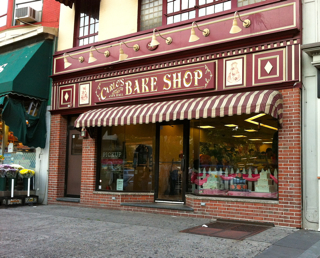 I used to get birthday cakes here, before Buddy Valastro was Cake Boss. 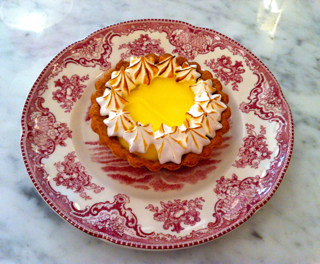 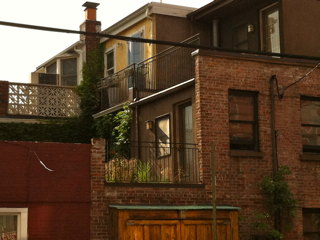 I always loved this little terrace; Hoboken is full of cool hideaways.

The cell phone ring interrupted my nostalgia, especially because it was the babysitter. When she picked up Sabrina from school, she'd run over some gravel and now the minivan had a flat.

One and a half blocks: Explain situation only to realize I have no clue whether our Toyota Sienna has a donut. Realize that I may be older but that doesn't necessarily mean I am wiser.

Half block: Call Dave at work. We have run-flat tires. No donut. He'll handle it. 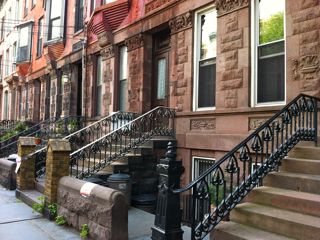 And then, back to my past. I made my way uptown. The brownstones looked as stately as ever, the towering oaks welcoming with their shade. Things were so familiar—and yet, they weren't. I was looking at them through very different eyes. I'd lived a whole other lifetime in the decade since leaving Hoboken.

I found the strangeness of the familiar even more disconcerting than the newness I'd seen downtown.

I thought back my twenties, when so much was unknown. What would happen with my career? Who would I marry? Where would we live? What would our kids be like? We moved out of Hoboken when I was five months pregnant with Max, and I felt a pang of regret for that me who had no idea what lay ahead. I could never have imagined my baby would have a stroke. Who'd imagine that?

I try not to wallow in Max melancholy. I did it all the time when he was younger: I'd wonder why my child, why me. That first year of his life was one big pity party. Even as I'd sit on the sofa and cuddle Max, my tears would drip down onto his cheeks.

I shook off the sadness and walked on. 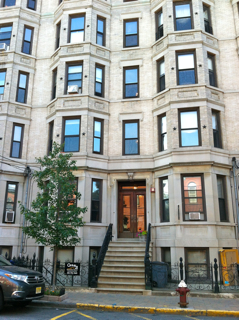 It was quite the scramble to find parking on alternate-side mornings. Sometimes I'd still be circling the block at 8:30 a.m., desperately trying to snag a spot and get to work on time. Then Pepe and I came up with a system. Starting at 7:45 he'd keep an eye out and if a "good" spot opened he'd stand in it and hold it for me; I'd buy him a lottery ticket as his fee. Finally, a parking garage opened and I was literally one of the first people to sign up. Every so often, though, I'd still get Pepe a lottery ticket.

As I got closer to Pepe's stoop, I was nervous. Pepe was pretty elderly back when then. What if he was gone? But as I neared I saw him sitting there, as if he'd never budged.

"PEPPPPPPEEE!!!" I said. I gave him a hug and we caught up some. I told him Dave and I had two kids, Max and Sabrina, and showed him photos.

Pepe admired their cuteness and asked what they were like.

I hesitated. Should I tell him about what happened to Max? The cerebral palsy?

No, I decided, that wasn't necessary. And so I told him how fun-loving and good natured Max is, like Dave, and of his love for Disney World and all things purple and chocolate ice-cream. I told him how feisty Sabrina is, how much she likes spelling and playing the violin and softball.

"They make me so happy," I told Pepe.

After we said goodbye, I walked down to the train station. And then I rode home to my lovely life.
Ellen Seidman at 6:44 AM