My amazing Max meets The Amazing Max and magic happens 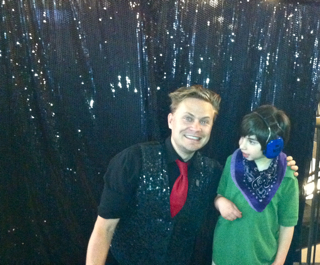 The invite came months ago: Would I like to take the kids to see The Amazing Max And The Box of Interesting Things? It's a one-man show in New York City with magician Max Darwin, a popular performer who's hosted a show on Nickelodeon, done performances for celeb clients, and wowed audiences at more than 3000 magic shows.

At first, I was just going to bring Sabrina; Max can't stand theaters. But then, he tolerated that performance in March during his class trip. And he loooooved that band with a guitar player named Max. And so I decided Magic Max would be a great thing to try.

To warm Max up, I had him watch this video:

He was fascinated and kept wanting to see it again. Each time it would end, though, he'd point at the screen and shake his head "Noooooooo." As in, he did not want to meet Magic Max.

Saturday, we headed into the city. As soon as we got to the theater, Max started whimpering. I coaxed him into the lobby; the show didn't start for 45 minutes, and it was totally quiet. Especially since Max already had his noise-blocking earphones on.

Max parked himself on a bench. And guess who dropped by? 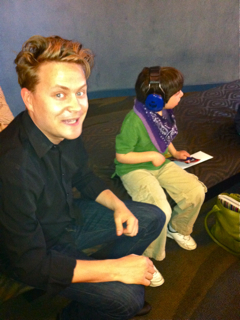 Max was psyched; Magic Max chatted with him for a bit and charmed him. After Magic Max left, though, my Max started looking worried again. When the house manager let us into the theater early (it pays to befriend house managers), Max literally lay down on the carpet and wailed. I spoke to him quietly and he stopped. But when the show was about to start, I picked him up and carried him inside as he cried.

The seats weren't completely filled, and I grabbed one toward the back and hugged Max tight. He alternated bouts of sobs with burying his head deep into my neck. A lot of people turned around to stare; I'm sure some were hoping that Max wouldn't disrupt the performance, and I didn't blame them. But I was hoping that once the show started, Max would calm down and enjoy it. I buried my face in his hair and breathed in its baby-shampoo smell.

"WAAAAAAAAAAHHHHHH," said Max, and he started wriggling so he could make a break for the front door. I held him tighter and wondered if I should bring some Mommy Magic next time we attempted to take him to the theater. Like, sedatives.

Scene 1: Magic Max comes out in a mini car and zooms around the stage. Max gets downright hysterical. Dave scoots him out and I stay with Sabrina.

I don't think I can fully express how relieved I felt. Blissful, too. I knew that Max would enjoy the show if he could just push past his sensory fears of the dark and the unknown, and he did. The show is entertaining for adults and kids; Magic Max is a funny, wry sort of guy. He pulled coins from a little girl's ear (and had some "fall" out of her nose and butt); he did this mind-blowing trick where he guessed the name someone in the audience was thinking of. He juggled. He did car tricks. He borrowed someone's wedding ring and unearthed it in a pile of gift boxes. When Magic Max's stuffed pig, Hamlet, tooled around in a remote-control car, Max decided he wanted to be part of the act; I grabbed him just as he was about to dash onstage.

Afterward, Max couldn't wait to get to the lobby, where Magic Max posed for photos and gave autographs.

Then we couldn't tear Max away from Magic Max.

Then we couldn't get Max out of the theater. 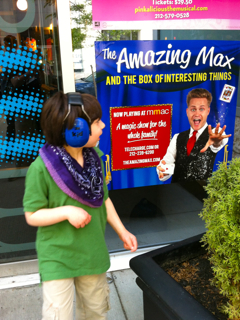 Then we couldn't get Max into the car 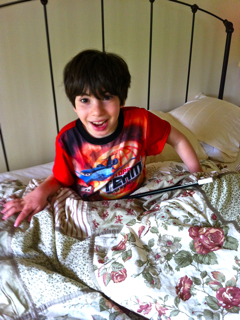 We bought a magic wand; Max sleeps with it next to his pillow

We also got the DVD Magic In Minutes in which Magic Max teaches kids how to do 12 different tricks. The kids have watched it at least ten times and at night, before bedtime, Sabrina does a magic show in her room for Max. I am not allowed in, but I hear both of them cracking up. Meanwhile, Max keeps saying he'd like to see the show again.

One small step for me, one giant step for Max-kind.

The Amazing Max is running through July 1; to get 10 percent off orchestra seats (rows D-J), click here. 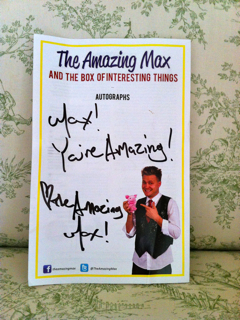