Maxsutawney Phyllis and other creatures we're hanging with 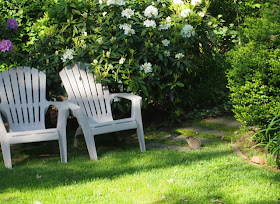 We've had a bunch of freaky nature things happen at our house in the last couple of years. Maybe this is par for the course when you live in suburbia. What do I know, I grew up in Brooklyn, New York where the main form of wildlife cracked gum loudly and had big hair.

One summer, we had a bunch of dead birds around the house. Last July, a Justin-Bieber-loving squirrel strolled into our living room. It's beginning to look like another exciting Wild Kingdom season round here because of the neighbors we've recently discovered.

Perhaps you recall our pet groundhog, named Maxsutawney Phil. Maxsutawney made a return a couple of months ago. "Man, he's getting old!" Dave said. "He's got a pooch and gray hair."

And then on Mother's Day, we spotted Maxustawney Phil... and two baby groundhogs. Yep, she's Maxsutawney Phyllis. (Word to Felicia: you called it last year!) The babies are adorable; Sabrina says they're twins. They come out early in the morning for breakfast (grass) and in the early evening for more. In between, I'm guessing they hit Whole Foods.

Saturday, I was out running errands; when I walked in the door Sabrina said, "Mommy, we have bees!" She, Max and Dave had been sitting on our deck when Max pointed at something. It was a swarm of bees. Dave dashed over to our next door neighbor's house for advice. "Don't worry about it!" Mr. W. said. "They'll move on." 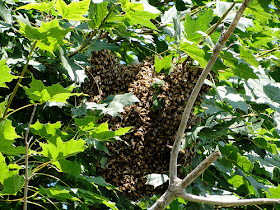 They looked like this, but there were a lot more

Dubious, Dave called an exterminator, who said it was illegal to exterminate them and suggested he call our state's Beekeepers Association. Dave left a message; by the time the guy called back a few hours, the bees had settled in a hole in the gigantic oak tree on the side of our house. "They won't sting you," said the man on the phone, "and they're good for the tree." I'm going to assume the bees got a great rate on a mortgage.

So we're going to be hanging with bees and groundhogs this summer. Anyone want to come over?


This week's Babble post: 20 Not-Obvious Photos Every Parent Should Take

Photo/whiteoakart
Ellen Seidman at 6:45 AM