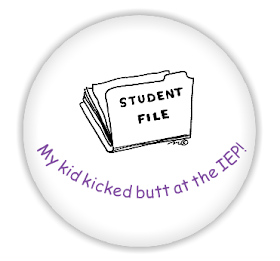 Last week was Max's IEP meeting (that's Individualized Education Program, for those of you who've never had the "privilege" of attending one). This is Max's sixth IEP, and everyone on his school Team Max showed: one PT, one OT, one speech therapist, one teacher, one nurse, one school administrator and our district coordinator.

I have a tradition at these IEPs, and it doesn't involve bringing a thermos of daquiris, though that would be ever so helpful. Every year, I get teary. Seeing all the goals for the upcoming year would make me very aware of the long road that lay ahead for Max. So would hearing his therapists discuss his challenges, even though there was always progress to report, too. (Luckily, I've never had to put up a fight for more services with his current school.) IEPs are meant to make sure your child gets the education he needs and deserves—a good thing!—but they're also often a tough reality check for parents. Yes, my child has special needs. Many of them, in fact.

This year, it was different. It's my own maturity as a special needs parent, I think, and the fact that Max is really forging ahead. One by one, as his team went around the table, every single person told of the significant progress Max has made this past year. His teacher spoke about how his confidence is building and his enthusiasm to spell and read. "I've seen huge improvements," she said. He's fully potty trained at school (we're still working on it at home). In fact, he's now giving high-fives to another kid in his class in potty training after she goes. His occupational therapist talked about him writing his name and other letters (so far he's nailed M, A, X, T, H, L, E, F, I, O, P, C). His physical therapist mentioned his ability to walk up and down the stairs mostly unassisted. The speech therapist discussed his ability to put sentences together on the iPad and his growing comprehension.

Wow. I knew Max had been doing amazing things, but hearing them all at once—corroborated by people not related to him!—felt incredible. I was seriously proud of my boy.

Of course, we discussed his goals for the upcoming year; Max will be learning to tell time and working on writing numbers. We'll be focusing on life skills, too, like pulling up and down pants for the potty. We're also going to focus on question-asking. Max recently started asking a q for the very first time, and now likes to use it regularly:

On top of my wish list: helping Max more clearly articulate words. He's talking so much lately, though he's hard to understand. The speech is a complex issue for him, particularly because his tongue doesn't move the way it needs to. But Max being Max, he keeps trying his best.

So there I was, giddy with pride. And you know what made me cry?

I stared down at the paperwork and scribbled something so nobody could see the tears. I'm not quite sure why that made me lose it; there were plenty of other reasons to weep tears of gladness. But it did.
Ellen Seidman at 6:40 AM