Could an ER handle your child? Are you sure? 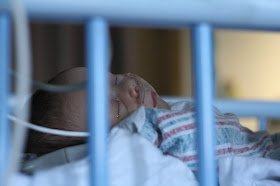 The seizure started around 6:45 a.m. Max had crashed in bed with me and Dave; I woke up when he did. I felt the heat radiating through his pajamas—Max had a major fever. I jumped up to grab a thermometer, and that's when I saw one of his feet start to twitch. In a heartbeat, I knew what was happening.

Dave woke up and saw. And then, suddenly, Max's entire body was shaking. I started crying as I dialed 911. "My child is having a seizure," I shouted to the woman on the other end of the line.

I remember Dave carrying Max downstairs and laying him on the sofa in our living room. I bent over and kept saying "Max, Max, Max." His eyes were rolled up, and he did not respond. Max was two years old at the time but to this day, I have flashbacks when I sit on that sofa.

Two policemen showed up; the ambulance took what seemed like forever to arrive. The paramedics couldn't stop the seizure in our 10-minute drive to the hospital. In the ER, the doctor asked for a history as Max lay on a gurney, naked except for his diaper, shaking nonstop. The doctor told us that the seizure medication wasn't working, and asked for the number of our pediatric neurologist to confer with him.

Max's seizure, a grand mal, lasted close to an hour. Despite the hell I'd been through during Max's two-week stay in the NICU, I think that hour counts as the worst one of my life.

I thought we were losing Max.

That was the only major interaction I've had with an ER since Max was born; he had one other seizure at age 5, but it stopped within two minutes. After that, our neuro upped his medication, and he's been fine since then. We were lucky; neither seizure had lasting effects.

To this day, I have no idea whether that doctor would have been able to stop Max's seizure sooner if he had better training in pediatric care. There's a chance he didn't, as I've learned from the R Baby Foundation. The nonprofit is devoted to improving pediatric emergency room care; 1 in 5 children will make one or more visit visit to an emergency department this year. After my friend Rebecca invited me to attend a fifth-anniversary gala, I read up on the work R Baby does—and I was shocked by some of the facts.

Scary stat #2: How quickly and accurately routine illnesses and emergencies are treated can mean the difference between life and death. The majority of emergency departments (EDs) are not prepared to handle babies and children. Children make up 27 percent of all emergency department visits, but only 6 percent of EDs in the US have the necessary supplies for pediatric emergencies.

If this doesn't unnerve you, the story of R Baby's founders, Phyllis and Andrew Rabinowitz, will. Back in 2006 they had a baby, Rebecca, born four weeks early. She came home from the NICU, seemingly healthy. When she got seriously congested, during repeated visits to the local ER the couple were told she had a common cold. 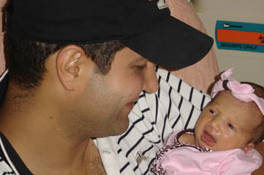 Rebecca passed away on the morning of July 21. Her parents later found out she'd contracted an enteroviral infection that can be life-treathening to babies. As they write, "Had her symptoms been treated, she may still be here today."

We're headed into "trauma season"—summer is the most dangerous time of years for kids, according to a study by the National Safe KIDS Campaign. Nearly half of all unintentional, injury-related deaths happen during summer months.

What you can do to keep your child safe:

• Ask your pediatrician which hospital he/she is affiliated with. Find out whether or not this is a pediatric ER, and what the local ER recommendations are. In case of an emergency, calling 911 or the closest ER (general or pediatric) is the best choice.

• Read up on Emergency Room Resources at R Baby; you can download info on how to know when to take a baby to the ER, what to expect when you arrive there, and items and information to have on hand.

• Share this information with babysitters, nannies and other caregivers in your child's life.

• Share your ER story to help inform other parents.

The R Baby Gala was held at The Plaza Hotel, an elegant night with gourmet bites from five-star chefs and women in beautiful dresses. I was proud to see Julia Beck, founder & CEO of Forty Weeks, receive the R Baby Champion Award. The silent auction and other efforts pulled in some $1.25 million for the foundation.

But there was a terrible truth beneath that glamorous night: Our children are not safe. It's reassuring to know The R Baby Foundation is working hard to change that. 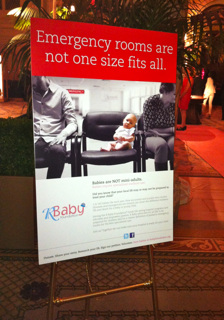 Top image/Dora Jacobs and the Stump-Coales
Ellen Seidman at 6:50 AM