A teen with Down syndrome crowned prom king, and my dream for future kings 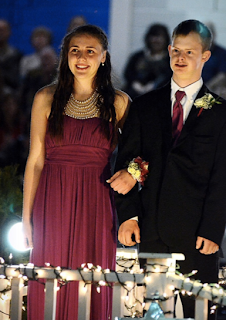 Last weekend Max Jackoski, a high school junior with Down syndrome in Lake George, New York, was named prom king. His mom, Lisa Jackoski, taped this video of his coronation. As she said, "Many of his classmates approached us after the coronation and said they decided as a group that it would mean more to Max than any of them." Max got a standing ovation.


He attended prom with a classmate, Hahnah Saroff, who'd reportedly asked Max's parents permission first before asking him out. "I wanted to go to prom with Max because I knew I would have a fun time," she's said. "I would see him at school or at the store down the street from our houses and he always had a smile on his face. His joyful attitude was contagious."

The trend of teens with Down syndrome being named prom queens and kings is all sorts of awesome, and inspiring to me as a parent of a kid with special needs. What I hope for is the day when those with Down syndrome, cerebral palsy or other special needs do not make headlines such as "Lake George Prom King Defies Odds." Because a lack of media attention would mean a prom king or queen with special needs is typical. No biggie. Just another cute, popular teen scoring classmates' votes and a crown.


For now, this is real progress. Max is prom king, his family is psyched, he is psyched, and I am so lifted by his bliss.