Myths and truths about autism from a doctor who knows 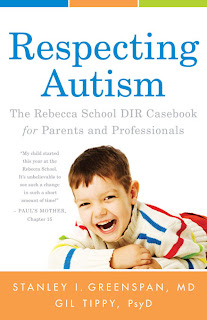 In honor of Autism Awareness Month, I'm thrilled to share a guest post by Dr. Gil Tippy, clinical director of the Rebecca School in New York City for children on the autism spectrum ages 4 to 21. He is coauthor, with Dr. Stanley I. Greenspan, of Respecting Autism, a book about 16 students and the tactics that have best helped them. Dr. Tippy is all about respect—for the kids he works with, and for their families. As you can see, it shines through in his responses. 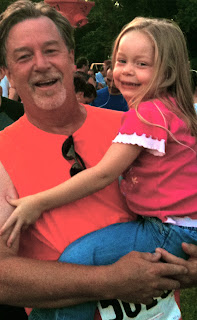 Dr. Tippy with his daughter, Sarah

The myth: Autism is a disorder of memory.
The truth: Autism Spectrum Disorders (ASD) are disorders of relating and communicating, not disorders of memory. This may seem obvious, given that the general public has seen great memories in action—in the movie Rain Man, for instance—but the people supplying the bulk of the interventions in autism seem to have forgotten it. In general, kids on the autism spectrum have very good memories. In fact, their parents generally report that their kids remember the littlest, seemingly insignificant details of everything. Kids see the trees very clearly, but cannot see the forest; they have trouble being big picture thinkers. That is why interventions that work on cramming kids’ memories with endless facts, drilling on meaningless detail, are ineffective and harmful. What kids on the spectrum need are interventions that focus on the core deficits of autism: relating and communicating.

The myth: Kids with ASDs are not interested in communicating.
The truth: Kids with ASDs very much want to communicate and get their needs met, but have not yet seen that the way we generally communicate, with it’s subtle social rules, is something they can do. Kids communicate constantly, and they need clinicians and teachers who can appreciate their communications. Interventions should never be aimed at “extinguishing behaviors” by punishment or ignoring, as those behaviors are the communications of the kids. For example, one student I know was on a program where the goal was to extinguish “inappropriate smiling!” I guess the theory was that the smiling seemed to be out of context, and so was inappropriate. I wanted to treat the smiling as a communication, and worked hard to understand what the student was trying to tell us and then respond appropriately to what the he was trying to say. Teachers and parents need to be shown how to understand what is underlying a behavior, and to use the child’s natural desire to communicate as an ally in the attempt to invite kids into our world. “Extinguishing behaviors” is really just stifling a child’s voice.

The myth: Kid’s with ASDs must be taught differently, by giving them a reward to get them what we want them to do.
The truth: Virtually every kid that I encounter at the Rebecca School comes after burning out on being taught some repetitive skills or facts, over and over, in order to earn some food reward or brief break-time reward. The kids soon figure out how to get the reward, but the tasks are tedious and boring to them, and like the intelligent kids they are, they begin to rebel. The parents tell me their kids dread the work, and that they, the parents came to dread making the kids do it. One parent described the clinicians who did this work with their kid as “the Vampires who come to our house!” Usually, by the time I meet them, the parents and kids are looking for a better way, and are glad to have a more respectful, developmental approach used.

Kids are kids, and they want to be in the world with their loving families and caregivers. Kids with spectrum disorders can and will learn when you respectfully try to understand what they are saying, follow their lead in the sense that you use their interests to hook them into interactions that you can use to expand their capabilities, and respect the idea that they have ideas and thoughts just as valid and important as ours. The notion that they have to be drilled to complete some set of things that we impose on them, to some level of accuracy, is bad education. Typical kids and adults don’t learn effectively this way—just look at the teaching-to-the-test failures of No Child Left Behind. Kids with spectrum disorders do not learn this way either. Love, respect, sparking a child’s interest, these are the keys to learning, not reward and punishment.

The myth: Kids with ASDs tend to be intellectually disabled.
The truth: In my experience with kids across the autism spectrum, kids with spectrum disorders have intelligence at least equal to the people working with them, often higher! The myth that kids with spectrum disorders are intellectually disabled is very entrenched. I recently was forced to sit through a presentation at an important early childhood education conference, where a nationally famous doctor told the audience that kids on the spectrum are usually intellectually disabled as well! This myth comes from the limited world of testing, where all of the tests generally done assume that kids are at the developmental level where they can think abstractly. Neuro-typical kids generally get there before their fourth birthday, but kids with spectrum disorders most likely are not yet thinking abstractly, and so do not perform on these tests. As a result, their test results make them look like they have intellectual disabilities, when in fact, they have developmental disorders that make the tests inappropriate! Test them in their areas of interest, outside of their developmental challenges, and you find intensely focused, bright kids with fabulous memories. The failure of the tests is rarely mentioned or understood.

If you treat kids with ASDs with respect, kindness, attention to their valiant attempts at communication and love, you watch them grow and develop just like all kids will. When you ignore their basic humanities and rights you do them a disservice, and no teacher, parent or caregiver ever has the right to do that, even in the name of “evidence-based treatment.” Treat kids the way you would like to be treated, the way you would like your children to be treated, and you can avoid mistakes built on these four common myths about autism spectrum disorders.
Ellen Seidman at 7:00 AM