Max is now a barfly and a groupie 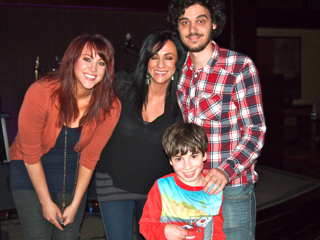 We’re back from vacation in Scottsdale, and as soon as I sort through a billion more photos I’ll gladly share because we had a phenomenal time.

Here’s Max with a band that's a regular at the hotel where we stayed, the Hyatt Regency Scottsdale Resort and Spa at Gainey Ranch. Our first evening there, after dinner, we heard music coming from the lounge area and strolled in. Max immediately made a beeline for the elevator—he does not like loud sounds.

But then, he paused. He cautiously approached the stage. And he stayed there for a good hour, raptly listening to every song. It was his first concert. 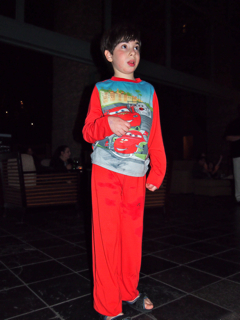 The group, Spain Band, plays a mix of folksy covers like Joleen and I Am A Man Of Constant Sorrow, along with original songs. There are two sisters, Gretchen and Brooke Spain, and two guys on guitar including one named… Max! My Max was very psyched, because he is ego-centric that way.

In case you're wondering: Yes, I let Max hang out in lounges in his Cars 2 pajamas. He's like the new Hugh Hefner! Only with way cooler pj's, and minus the Playboy Bunnies.

The next morning, Max was doing a crazy dance in our room and pointing downstairs. He wanted to go back and hear the music. And so, we returned the next night Spain Band played. We sat on cushy sofas, ordered drinks (Max has developed a fondness for martinis!) (kid-ding!), chilled and listened. 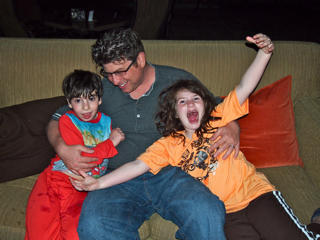 By the end of our vacation, the Spain sisters were greeting him by name. “Hi, Max!” they said from the stage, and Max grinned the biggest grin. I half expected him to get up there and do a rousing rendition of his favorite song, “You Might Think I’m Crazy” (the version by Weezer, from Cars 2).

Before Max went to sleep last night, we surfed YouTube to find videos by the band.


This is just one of many reasons I think traveling is great for Max, whether we’re someplace an hour away by car or five hours by flight: It exposes him to new things. Because he's in a different mindset and feeling that spirt of adventure, he tends to be more open to new experiences.

Thank you, Spain Band, for the birth of a barfly. I'm not quite ready to do the club scene in New York with Max yet but, hey, I'm sure he wouldn't want his mom tagging along anyway.

How about you: Have you also found that your kids tend to act differently (for the better!) on vacation?
Ellen Seidman at 6:38 AM