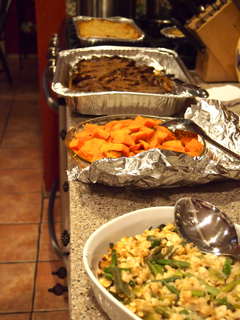 I am not a real cook but this year, I decided to go all out. Perhaps you saw my frantic Facebook posts where I asked deep and meaningful questions such as "Help! My brisket's not fitting in the crockpot! Should I let it go up the sides or layer it?" People were incredibly helpful and then I somehow connected with a crockpot author, Stephanie O'Dea, on Twitter (aka my brisket patron saint). I also found it particularly reassuring when Joy, a Facebook friend, said, "My husband says it's hard to screw up with a crockpot! And he's a Texan, so I'm gonna assume he knows his brisket!"

As I cooked in the calm of the night, I was wondering how Max would weather the seder. Over the years, we've adapted to his needs. Nobody sings loudly and we also let him sit with noise-reduction headphones on. This year, I was thinking maybe he'd be game to sing along with some songs; he's into singing lately (although, true, it's only "You Might Thank I'm Crazy" from the movie Cars 2).

Making the meringue for the lemon pie turned out to be an ordeal. Cooks far wiser than I know that a bit of egg yolk in the egg whites ruins your chances of it meringue-ing. I had to toss a batch and start over. And then, because by then it was 1 in the morning, I absentmindedly dumped an egg yolk into the bowl of egg whites. Do-over! And then it was taking forever for the egg whites and sugar to thicken and I thought I'd messed up again.

As probably every one else on earth knows, meringue browns in a couple of minutes in the oven. I saw it turning color, kept it in there and suddenly, I had a lovely black meringue. So I scraped the top off, shoved it back in and decided next year we were going back to getting our meal from Whole Foods. 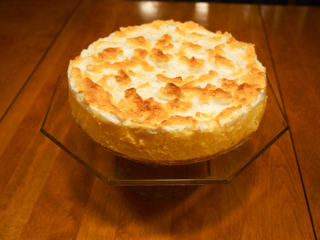 Not too shabby for a non-cook, eh?

Max is a meat and potatoes kind of guy, and when he came into the kitchen in the morning and smelled the brisket still in the crockpot he said "Mmmmmmm!" And then he told me he wanted a LOT. 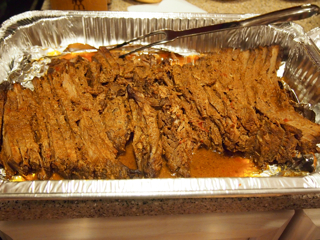 Max has matured in a lot of ways this year and sure enough, he was a model seder sitter. He happily slurped soup. Dave fed him nice, juicy chunks of brisket. We let him have the headphones and iPad on and he stayed put for most of the meal, which is more than I can say for some sister who shall remain nameless.

I was psyched by how well the meal went in general, but especially for Max. Everyone was duly wowed by my cooking (or, more likely, by the mere fact that I'd actually cooked).

Hope you guys had excellent seders/Easter dinners! How does your child do at holiday meals? What makes things go easier? 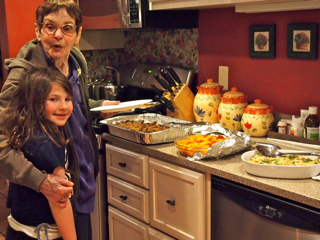