Building confidence in our kids through creativity 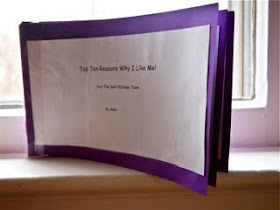 Ever heard of The Miracle Project? It's a nonprofit that enables kids and teens with autism and other special needs to express themselves through music, dance, acting, story-telling and writing. You've gotta love their motto: "ALL children of ALL abilities grow in school and in spirit while creating and performing in original musicals."

The organization is in need of more money for more programs. Happily, its expanding its theater and film arts program to San Diego and San Jose, thanks to a grant from CVS Caremark through their All Kids Can program. The free training will center around the principles of The Miracle Project's "7 Keys To Unlock Autism." (It's open to the public and happening between 4 and 7 Thursday afternoon at Pioneer Day School in San Diego so if you're in the area, stop by.)

Max on stage? Not so much. He's developed an interest in bands, as you may know from his recent barfly/groupie experience. But he's not quite ready to perform, even if Cars 2: The Musical was happening in his school (or even Chocolate Ice-Cream: The Musical, for that matter). Still, one thing he's very much into now is putting together his own books. We made a Cars 2 one the other day. He recently came home from school with one he'd made after his awesome teacher, Pat, read I'm Gonna Like Me! by Jamie Lee Curtis to the class. Each kid did a Top 10 Reasons Why I Like Me! booklet. Can you guess whose this is? 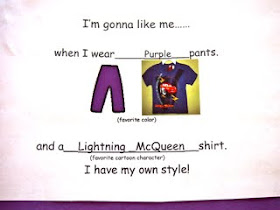 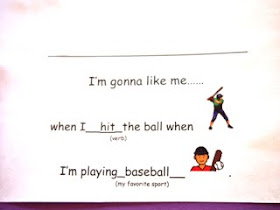 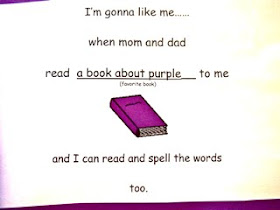 Max and I read it together, and he seemed very proud of himself.

That's one key to sparking our kids' creativity (and basically any kids' creativity): Encourage what they love to do. My parents were really good about that when I was a kid. I was pretty self-motivated and so I was the one suggesting piano lessons, ballet lessons, sewing lessons, learning how to do calligraphy. They always said yes. On Friday nights, they watched the mini plays my sister and I put on, and they regularly bought us craft kits. Once, Dad inexplicably brought home an accordion in the hopes I would play it. But, no. 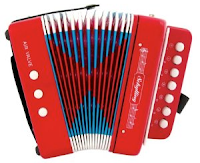 That did not stop me from recently buying this mini accordion for Max, at the suggestion of one of his occupational therapists. He's played it a few times but he's kind of meh about it, a chip off the old block. On occasion, he likes to plunk out his own tunes on the piano.

Max is really into drawing; he's constantly going at it on the easel in the playroom. Always, in purple crayon. Mostly, scribbles. But they are awesome scribbles. He also likes to use Crayola's Color Studio HD app, which is great because the stylus is nice and chunky and easy to grasp. One of his favorite places for drawing? On the steamed-up bathroom window, after his bath. Sometimes I randomly leave the shower on hot for a few minutes so Max can draw. Come to think of it, I can't think of any artist who's used steam as a medium (watch out, Damien Hirst!).

As parents of kids with special needs, we have a lot to help them with—talking, walking, eating, social skills and other major stuff. But I think it's just as important to help them develop their creativity. Maybe they're not yet able to take pride in their steps or words, but most any child can be proud of something they create. And building up that confidence muscle will be a Very Good Thing to help them get along in this world.

What sort of ways have you found to encourage your child's creativity?

This is one of a series of posts sponsored by CVS Caremark All Kids Can, a commitment to helping children of all abilities be the best they can be. Like them on Facebook!