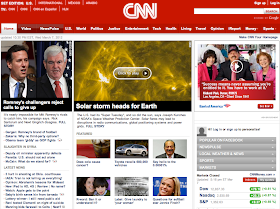 If you blog, you know that putting yourself out there means you open yourself to offensive comments. As with many things in life, you can't control people—but you can control your reaction.

An article on CNN.com about the campaign against the word "retard," which featured my video, ended up on the homepage. It triggered an avalanche of arguments, anger, ignorance and hate. Comment sections on news sites tend to bring out the worst in people. You wonder why some people have so much time to sling nasty around—as if it's their jobs or something. YouTube also had some doozies.

It was like driving by an accident on a road: At first, I couldn't tear my eyes away. I knew I needed to stop reading the comments and eventually I did. But then I lay awake in bed last night, thinking about some of them and raging. And this is what I decided: I am going to pity these people. And suddenly, I was calmer. (Although when a Facebook friend called them "completely heartless, ignorant asshats," it didn't suck.)

I'm going to pity the people who said "This article is retarded!" because they are wholly lacking empathy, a handy human trait. There's no app for that.

I'm going to pity the people who said "Your child is a retard" because they are cruel, and when you're cruel it comes from a very unhappy place.


I'm going to pity the person who wrote "retardation and other developmental disabilities are a burden to our health care system and our educational system" because he was born without a soul—a major disability, if you ask me.

I'm going to pity the person who said my son will never be considered an "equal" in society because that dude is closed-minded, and will miss out on much in this world.

I'm going to pity the person who wrote, "PLEASE don't take away the word retarded, it's a great word! It's one of the funniest words in the dictionary" because there's also no app for curing stupidity. As one commenter noted, "Very often the word is used by those lacking much capacity themselves."

I'm going to pity the teen girl who felt the need to note that other species kill their disabled when they are young, because it is sad that she has such hate inside her. (As my wise friend Alice of Finslippy noted, "Some species also eat their own poop.")


I'm going to pity the person who said "Maybe if you weren't smoking crack Max wouldn't have been a retard" because it is dubious he ever had a mother.

I'm going to pity all of 'em because they'll never be as happy, open-minded, caring or loving as Max already is.
Ellen Seidman at 8:55 PM