Should kids with disabilities be denied transplants? Some doctors think so 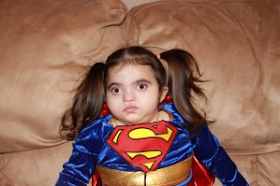 This is Amelia. She is 2 years old, almost 3. Her mom, Chrissy Rivera, describes her as "a happy child whose perfect day involves swinging in the Pooh swing, batting her favorite toy bug under her toy mat, and rolling around on the living room floor to bang her leg on the dog's head. In her eyes, her life is perfect. And after two years of having her in my life, in my eyes her life is perfect."

She sounds like any little kid, full of life and joy. Amelia's doctor, however, does not think she deserves to live.

Amelia has Wolf-Hirschhorn Syndrome, a rare genetic condition that causes cognitive impairment. Other problems can include heart defects, cleft lip, hearing impairment, eye problems and seizures. Amelia has kidney failure. She needs a transplant within six months to a year.

Her mom, Chrissy, put up a horrific and heartbreaking post the other day about a doctor's decision to recommend against a kidney transplant for Amelia. Please, read what Chrissy wrote and show your support. I'll sum up what happened: She and her husband bring Amelia for an exam, as usual, to The Children's Hospital of Philadelphia. As Amelia sits sleeping between them, they start a discussion with a doctor and a social worker that they think will be about the transplant process. The doctor places two papers on the table. One has the words "mentally retarded" highlighted; the other has "brain damage" highlighted.

The mom gets distracted by those words as the doctor speaks and suddenly, the awful reality dawns on her. The doctor is telling her Amelia can't have a transplant because she is "mentally retarded." In his words, as Chrissy recounts it: "She is not eligible because of her quality of life...because of her mental delays." And it didn't matter if Chrissy, her husband or someone in their family donate kidneys; the doctor claimed CHOP won't do the transplant.

Enraged, tears rolling down her face, Chrissy debates him. She tells him she will fight for her child's transplant. And he says, "I will take this back to the team. We meet once a month. I will tell them I do not recommend Amelia for a transplant because she is mentally retarded and we will vote."

As a human being, I am horrified. As a parent, I am distraught. And as the parent of a child with special needs, I am out of my head with anger. The thought that a doctor, an ethics committee or a hospital—an excellent, well-respected hospital that treats many, many children with disabilities—could consider a child with cognitive impairment less worthy of a transplant than a child without impairments is mind-boggling.

I Googled around and found an article on the topic printed in the journal of Pediatric Transplantation in 2006. Before the '90s, transplants were considered inadvisable for those with cognitive impairments—a "contraindication." The common thinking was that people with cognitive disabilities lacked the capability to handle post-transplant regimens, but some doctors also "felt ethically obligated to allocate organs based on the individual's quality of life."

In 1995 Sandra Jensen, a 32-year-old with Down syndrome, was denied a heart-lung transplant at two California hospitals because of her cognitive impairments. Advocates fought for her rights and she received a transplant at Stanford. She died 18 months later when her body rejected the medication.

The case made headlines, but did not shift perceptions. Years later, in 2004, a questionnaire about access to transplant centers sent to members of The Arc (the country's largest organization for people with intellectual and developmental disabilities) revealed that 80 percent of people believed that those with cognitive disabilities are discriminated against when it comes to to organ transplant operations.

Chrissy notes this is a prevalent problem in medical centers around the country. It's clear that if a major hospital like CHOP still upholds that people with cognitive disabilities shouldn't be eligible for transplants, not much has changed in recent years. There are many factors that go into the transplant decision, but disability should not be one of them.

The words that doctor used to describe Amelia, mentally retarded, are a clear indication that deep-rooted prejudices are at work here. The thinking that the "mentally retarded"—an antiquated, derogatory term—are lesser human beings is a perception that dates back to times when those with cognitive impairment were locked away in institutions. How doctors can still think that way is beyond my understanding. That doctors can think they are God, qualified to decide who has the right to live and die, infuriates me.

A child with cognitive impairment deserves the same chance at life as any other child.

Sometimes, it helps to contact the people whose job it is to care about a hospital's reputation. That would be CHOP's public relations team, and you can find their names and emails here. Pick one, pick 'em all, and let them know that Amelia deserves a transplant. At this point, it's not even a question of whether or not she goes on an organ waiting list—her family is willing to donate them.

I hope CHOP reconsiders. It describes itself as "one of the leading pediatric hospitals and research centers in the world" but this survival-of-the-fittest approach is the opposite of progressive—it is downright barbaric. If CHOP continues to deny Amelia a transplant, I hope she can have it done at another hospital.

And I hope that any hospital or medical center out there that considers cognitive impairment a "contraindication" for organ transplants reexamines its ethics, its heart and its soul.

Update: CHOP issued a statement on its Facebook page in response to the outrage expressed there, on blogs and on Twitter about Amelia and her transplant. It notes, "CHOP does not have any criteria which exclude patients from being considered for transplant solely on the basis of their cognitive status." This certainly does not explain: 1) why CHOP would even consider cognitive status a factor, even if it's one of many and 2) what this poor couple were told by that doctor the other day. If what he said reflected his own warped point of view, and not the hospital's, then an investigation of that doctor is in order.

Update #2: On Monday, January 16, Chrissy told USA Today that she and her husband had been invited back to CHOP to discuss a transplant.

Update #3: On Wednesday, February 15, CHOP issued an official apology to the Riveras. The statement noted, "As an organization, we regret that we communicated in a manner that did not clearly reflect our policies or intent and apologize for the Riveras' experience." Amelia is under consideration for a transplant.

Update #4: On August 6, 2012, Chrissy Rivera announced that Amelia is officially approved for receiving a kidney transplant—and that Chrissy would be the donor.

Update #5: Amelia Rivera got her transplant in July 2013, receiving a kidney from her mother. As per a USA Today article about her on October 2013, she is growing and thriving.