Max has a knock-knock joke for you 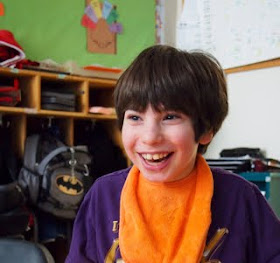 I don't want to alarm you or anything, but it appears that our family has some sort of knock-knock-joke gene mutation.
First came Sabrina's nonsense ones, which she eventually grew out of despite the fact that I cracked up every single time.
Max's jokes have typically been of the doodie variety. He went through a phase in which he delighted in calling my sister Judy Doodie and she gladly tolerated that, both because she was used to me referring to her that way growing up (I did not mention it in her wedding toast, mind you) and because we were psyched Max was figuring out rhymes.
And now, Max is getting into knock-knock jokes, and of course it involves one of his current obsessions. This morning, he was watching Little Bear on TV and someone made a knock-knock joke. Max looked at me and said something, and I didn't understand what he'd said. And then he said it again:
Max: "Knock knock!"
Me: "Who's there?
Max: "Cars 2!"
And then, of course, I cracked up.
Ellen Seidman at 6:45 AM