An interview with Zach Anner of Rollin' With Zach 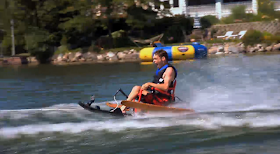 Travel shows hosted by a funny guy with cerebral palsy who you hope your son will grow up to be like don't come along all that often. So I am totally looking forward to the debut of Rollin' With Zach, the new travel show hosted by Zach Anner. It airs tonight on the OWN Network at 8 PM EST, back-to-back-episodes. I've been in awe of Zach since he was in the running for winning Oprah's contest. As Zach famously said, he has "the sexiest of all the palsies." But he won because he is damn funny.

I got to interview Zach's mom, Susan, last spring, and then she hooked me up with Zach (she has connections, you know). Here's what he had to say:

OK, so I have a little dude who's 8 and just like you—he's handsome and funny, although I am not sure you think farts are as funny as he does.
"It never changes!"

Good to know! OK, the first episode of your show takes place in L.A. What's after that?
"Chicago. The only time I've been there it was a frozen tundra, for The Oprah Show, but people said Chicago in summer is beautiful! Some of the most beautiful women you'll ever see are there, I was constantly turning my head and being awkward."

Are you up for having groupies?
"I am hoping to exploit my TV show to get girls. I'm not above that."

What's the funniest thing that happened when you were filming the first episodes?
"I learned to embrace the moments when you would otherwise be embarrassed. Just go for it 100 percent. You know how shows make people look really great the first time they go ice-skating and things like that? I encouraged all of the falling off stuff. We embrace the humor of messing up. In New York there was this time I had to strip down in the middle of Wall Street as I was waiting for a cab and I had novelty underwear on. They didn't show that, thankfully." 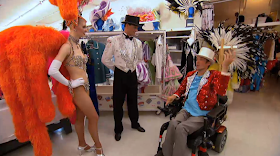 Way to occupy Wall Street! Was there any particular time during filming when you felt people treated you too special for having CP and if so, how did you handle it?
"I think if anything, people treat people with a camera crew in front of them more different than anyone with CP. So I was treated well all of the time! As far as the CP, I don't think it's good to have social guidelines and treat everyone the same—it's one on one interactions that change people's minds. We worked with a lot of awesome adaptive groups, like Life Rolls On, Adaptive Adventures and Life Without Limits, for doing the more physical stuff, and that's one of the things I'm most excited about. The show will highlight how people with disabilities can take part in adventure sports and physical things you'd think aren't possible. I've spent a lot of time doing filmmaking, it was cool to become more aware of the disability community and how cool and welcoming they all were."

John Mayer wrote the theme song for the show, Let The Boy. What does it mean to you?
"The full line is 'Let the boy see the world as he wants to.' To me, that's the message my parents had to tell the world. One thing I've noticed is that in order for a kid to grow up and develop interests and a personality and be a cool kid, the parents have to encourage that. That song is about my journey—I want to do these things and not be judged or hindered. When I heard the song, it hit the nail on the head for me. Having the world encourage and embrace the spirit of adventure for kids they would normally protect, or overprotect." 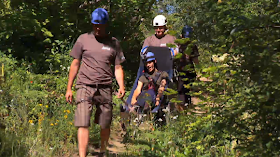 If you wouldn't mind groupies, you should hang out with John Mayer.
"I was trying to get into singing, but I sounded like a frog being murdered for anatomy class. But it would be good to hang out with him. He blew me away, it's been overwhelming to see his support."

What's most surprised you about doing a show?
"I never expected to encounter so many supportive people who seem to get what it's all about. From a filmmaking perspective, TV is about learning how to communicate so the process of the show has taught me how to be a better communicator."

What is your best advice to Max and other kids with disabilities about growing up and kicking butt?
"Discover what your passion is and follow that. I don't know if you've noticed this with other parents but I've encountered a lot of kids whose parents like to put the focus too much on their disability and the relationship between the parent and the child and the disability, rather than fostering the child's interests. That's key. Kids have to develop a sense of humor and a thick skin. There will be a lot of times when people make fun of you or you deal with people who are closed-minded and you have to learn to connect with these people and help them see who you are—or not care about those people. As long as you know who you are at your core, disability or not, you'll be a kick-ass person. A disability is not an identity. It's part of you, but I consider it a relatively small part. I love filmmaking, I love being silly and funny, I love being a storyteller and a communicator. That's what I am, and I just happen to have a disability." 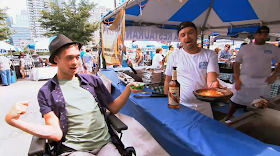 Obviously, your mom raised you right. What other advice do you have for moms of kids with special needs?
"Have faith in your abilities as a parent and your children's abilities as individuals to make choices and take risks. I think parents are afraid to let kids go. Let kids realize their potential. Find a way to be supportive in a way that lets kids explore. My whole family was funny and goofy and never shielded me. I still feel lucky. And I'm lucky to have had their unwavering support. When your kids are young, tell 'em that it's all right to be different and still be cool. I wish more parents would say that. Expose them to cool things. My dad would make silly videos and mom my mom would write plays and take us to them, and so both sides fostered my imagination.

When you think about it, everybody is different! It's so ridiculous that a wheelchair is looked at as a huge difference. My mom, when I asked her about kids making fun of me and what I should do she said, 'Tell them to go to hell!' I never did—I chose to do that in a nicer way, but it was good to be given that freedom to be able to express myself!"

Love that! I'm really looking forward to seeing the show. I guess it would be ridiculous to tell you to break a leg, right?
"I've pretty much succeeded in breaking both legs!"