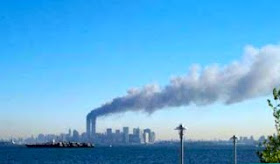 The events of 9/11 are forever seared into my mind. That Tuesday, I was crossing the Hudson River on a ferry when the Twin Towers came into view. Before I left home, I'd heard Katie Couric on the Today show mention one plane had hit; the ticket seller told me about the second plane. Still, I headed into work. I was on the top deck, me and a handful of other passengers. Thick smoke billowed out of both buildings. We stared in horrified silence, but we had hope; it seemed like the fires could be put out.

I went to work. I cried as I watched the towers collapse on the TV in the office conference room. I took the ferry home to Hoboken with throngs of people, the only way out of New York City. At the terminal, emergency workers were hosing down people who had been in the World Trade Center area, for fear of chemical warfare. Fighter planes flew overhead. "There's a bomb!" someone yelled and suddenly we were all running. I went home. From our building's rooftop, Dave and I watched smoke rise from the smoldering ruins. The Twin Towers had, incomprehensibly, become a graveyard.
For weeks after, there were flyers all around town for missing young men and women; Hoboken, N.J. had many residents who worked at The World Trade Center. The full number of people who died in the towers and planes, 2753, would come much later. Plus 224 dead in the Pentagon and in Pennsylvania. Even this weekend, I read horrifying new stats: More than 1600 people lost spouses or partners in the attacks, and 3000 children lost parents.
Sabrina's school had a ceremony on Friday where they spoke of angry people who didn't use words, only bad actions—airplanes to hurt people in buildings. They also discussed the people who did use kind words and actions, people called "heroes." Sabrina didn't want to talk about it at home, and I didn't push her. Max is unaware; someday, when he is ready, I will tell him.
This whole week, I've been reading articles online: about the events of that day, the memorials, the people who died. I found out that one of the passengers on Flight 93, Colleen L. Fraser, was a nationally-known advocate for the disabled who'd helped draft the Americans With Disabilities Act. Tomorrow, I'm going to a local ceremony where a monument will be dedicated to the victims.
I remember thinking on 9/11 how grateful I was that I didn't have kids to explain this to, and that I was free to sob uncontrollably.
What do you remember about 9/11? Where were you on that day?
If you lost a loved one, my thoughts and heart are with you.
Ellen Seidman at 3:45 PM