We need more boat rides and hibachi in our lives 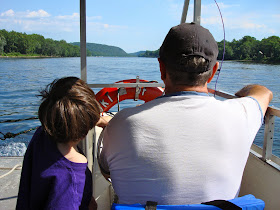 Finding new stuff to do with Max that doesn't involve spaghetti and car washes (neither obsession shows any sign of dwindling) can be a challenge. He's often wary and resistant, but Dave and I keep exposing him to new activities and places, because we want to help him push past his fear and open his mind. Also, we get bored.
What I'm realizing, though (special needs parent epiphany #28,716) is that what works best for Max is a mix of the familiar and the new. And so, we come to boat rides and hibachi. 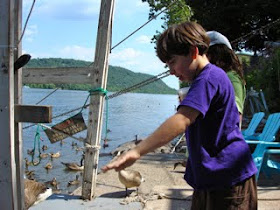 This weekend, we took the kids on a boat on the Delaware River, the same one we we were on last summer. Actually, let me correct that: Max decided to take US on the boat. He remembered exactly where it was in New Hope, PA and scooted right down the path to the dock. His visual memory is just beyond; it's one of his special strengths. 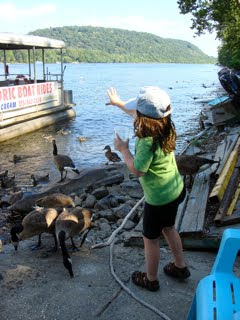 The kids enjoyed feeding the ducks corn when they weren't wrestling each other to get the damn cups of corn. At one point, Sabrina grabbed Max's cup and dumped it into hers. At which point he tried to grab it back. At which point I was PSYCHED to see him using his hands like that, as dexterity is definitely not a special strength. Grab, Max, grab! Don't tell anyone I said that. 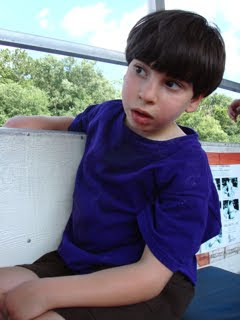 Max was a little dubious at first. 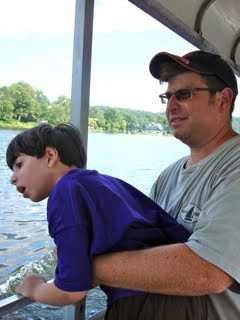 But he quickly warmed up... 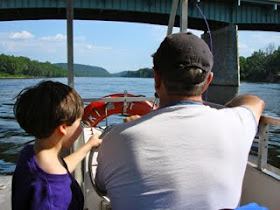 ...and decided to drive the boat. He just ambled up to the captain and, without a word, held onto part of the wheel. Like he'd been driving boats all his life. Said captain was very nice. 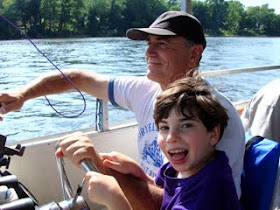 The next thing you know, Max was practically sitting in the guy's lap. Pretty soon, he was helping to turn the boat around. Then he spied some kids on Jet Skis and decided he wanted one. We just sort of nodded. Then he did not want to get off the boat. Unlike the car wash, though, we weren't paying for a second ride. Because we are cheap killjoys like that.
For dinner, we tried hibachi. This entailed going to a restaurant Max had never been to before, which is always tricky territory as he's been known to run out of them, screeching, as if someone just served him spaghetti and slugs or something. We've learned to go to dinner really early, before normal humans eat. Like, 4:30 early. We were, of course, the only people there. Max was calm.
I had a feeling it was going to be a hit. A table with FIRE! And sure enough... 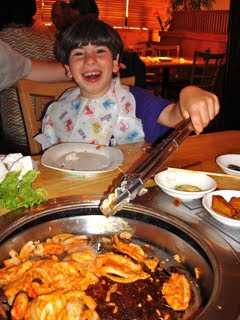 ...he had a blast. Bonus feat of fine motor skills: He grasped tongs! Max loved cooking the chicken. He kept dumping rice into the dish, and the scorch-y smell wasn't entirely appetizing, but he sat through an entire meal. And did not catch fire, once. He didn't even try to get Sabrina to catch fire.
My conclusion is that we need more boat rides and hibachi in our life. Maybe you do too? 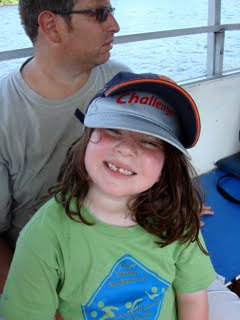