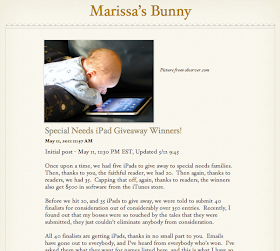 There's something brewing in our community. Promises have gone unfulfilled, accusations are flying, curtains are being looked behind. It's troubling, especially in a community that's centered around trust, caring, goodwill and doing good.

I first became aware of this after an email arrived on Wednesday from a woman I've seen on Twitter. She said she'd won an iPad being given away for kids with special needs, on the blog Marissa's Bunny. She never received it, she wrote; she said Mike—the blog owner and Marissa's father—had emailed her to say that he'd received a threatening email and had shut down all operations.

That same day I got a Facebook message from a blogger friend. She'd also been informed that she won an iPad for her child, one of 40 people the blog said had won one. She hadn't received it. It seemed as if there were at least 10 winners who hadn't gotten their iPads.

I knew who Mike was. I've read his posts, I've seen the photos of bright-eyed Marissa, a little girl suffering from infantile spasms, and once, a distressing video of her having a seizure. I've emailed with Mike and mentioned the iPad giveaways when he asked me to. It seemed like an awesome thing; iPads and speech apps have been a godsend for kids who have challenges verbalizing words. Last Thursday, I got the following email:

We've been in contact with law enforcement in regards to the threats and they consider the email to be a blackmail attempt and a legitimate threat to the safety of my entire family. Given their advice and that of our lawyers, we've been advised to not ship any more iPads until the nature of the threats has been identified and resolved.

The person or people who sent the threatening emails has our home address, has all of our personal information, and that of the rest of my family as well. Protecting my family has to be my first priority. Currently, there are people working in conjunction with UPS to determine what's already happened and how we need to move forward.

Some of you have been very supportive during this difficult time and we're very grateful. Some of you haven't, and that's completely understandable and we certainly hold no ill will. From both sides of the issue, this has been a troubling time.

As someone who'd interacted with Mike by email, as someone who had read about his little girl and her condition, I was concerned. You feel for the parents you meet in Special Needs World. You get what they are going through. You cheer on their children and worry when they are ailing. You want to help.

People have definitely helped. There was a ChipIn! widget on Marissa's Bunny to raise funds for care and surgery she needed, and mentions of Mike's bosses matching money raised. Mike wrote about starting a foundation to provide for kids with special needs, to which people could also contribute. I gave money a couple of months later. There was no way to vouch for the family, no proof of how funds would be used; I trusted, and felt compelled to help. A ChipIn! widget on Marissa's Bunny says $29,851.24 was raised.

Earlier today, I asked Mike what he wanted to say to the community. I said that I would be glad to speak with a parent who has received an iPad. Mike said he was working on getting his bosses to chat with me. He emailed this statement several hours later:


"When we selected the final 40 awardees back on March 21st from a pool of 311 applicants and provided them to the selection committee, we had no idea that all the finalists would be awarded at that time. We were originally expecting 5, then 10, then 20, then finally 35. During the determination of the awardees, the entire selection committee was so touched by everybody's stories, they decided to tell me in early May that they would award all 40 finalists the ipads and applications. The winners were publicly announced on May 11th. Through the rest of May and through June 22nd we collected iPad application lists to pre-purchase for the winners, and other than some surmountable legal issues we were informed all was proceeding reasonably smoothly.

Through all the escalations of awards, this has proven to be a monumental task, much more than anybody expected initially and we probably didn't have adequate consistent manpower available. We live in Northern Virginia and I telecommute to North Carolina. Application purchase, box packing, and shipping of the iPads with accessories was supposed to have been handled at the North Carolina location. We've recently discovered that many mistakes were made by a variety of employees and not reported to us even after we became directly involved with the principals. We were informed the iPads had shipped, and given our family's ongoing health concerns, perhaps we didn't supervise the situation as well as we could have. On the night of July 6th, we received an anonymous threatening email related to the giveaway and promptly informed the awardees of the email.

After consultation with law enforcement and legal representation, the decision was made to temporarily halt the iPad shipping process based on the threat. Since then, we have received some information as to the origin and nature of the threat and it has been provided to members of law enforcement. While we haven't been supplied a timetable, as soon as the threat evaluation is complete we fully intend to closely and in person supervise future shipping of the iPads to the awardees as long as they had no involvement in the threats. Verifiable tracking information omitting awardees' personal information will be provided to any interested party during the shipping process. When the evaluation is complete and shipping recommences, an announcement will be made at Marissa's Bunny.

While my goal has always been to help the special needs community, I'd be remiss in my duties as a husband and a Father to not take care of my own family's safety first due to the still unclear nature of the threat at the time of this post. That said, we remain committed to the cause, and anxiously await reports in the not too distant future of iPads arriving and photos of their first use."

So, that's where things stand. There are disappointed, disgruntled and just plain pissed-off parents out there who are dubious they will get their iPads for their children. There are lots of questions and no resolution yet. Speculation isn't going to do any good.

Tonight, I'm hoping parents get those iPads for their kids. I'm thinking of Marissa. And I'm hoping that nothing ruptures the trust and incredible support system we have built as parents of kids with special needs.

UPDATE: The following is an email sent by The Marissa's Bunny Foundation at 7:39 p.m. ET on July 11:

"There are no longer any iPads. I've never had access to the matching funds I've been promised. Something along the way changed and I'm getting hung out to dry by my bosses.

As to my obliqueness about my bosses and the company I work for, If their identities ever got out, long ago they promised I'd lose my job, my insurance, and take us for everything we have making Marissa's surgery impossible to afford. If I keep my mouth shut and the fact that I got screwed never gets out in any way then I keep my job, and my insurance, and they've promised to pay for Marissa's surgery after we give everything we can.

My reputation is now screwed with the SN community but I have to be able to give Marissa the best chance for as close to normal as possible and will happily work under whatever conditions I need to. I'll dance with the Devil if it gets Marissa what she needs.

We're not going to fundraise any more. There won't be any more giveaways on Marissasbunny for special needs or otherwise. I'm still going to update with Marissa's surgical preps and that kind of thing, but that's all. Marissasbunny is going back to what it was before they got involved, back when many of you started reading. No more promotions, just Marissa and her brother's story.

There are the first words that are my own and not through a corporate lawyer since Thursday.

UPDATE #2: Tonight, 7/12, Mike emailed four photos of a woman, Kelly G, and her son with an iPad. Today, Mike said, they received an iPad he purchased for them. This is one of the photos; all of them can be found on his blog.

UPDATE #3 (aka War and Peace 2.0): This evening, 7/13, I received an email from Kelly G, asking that I take down the photo of her with her son. I did. She said that today she returned the iPad to Mike. As she wrote, "I wish I would have spent more time thinking about everything and everyone involved."
Ellen Seidman at 11:45 PM